"My Faith Based Retirement" 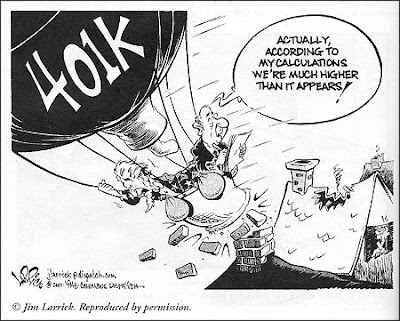 Since it is Sunday, I'm going to take a break this morning from writing a longer post and instead allow op-ed columnist Joe Nocera do the talking from a column published on Friday in the New York Times:


My 60th birthday is less than a week and a half away, and if there is one thing I can say with certainty it’s that 60 is not the new 50.

My body creaks and groans. My eyes aren’t what they used to be. I don’t sleep as soundly as I did just a few years ago. Lately, I’ve been seeing a lot of doctors, just to make sure everything still more or less works.

I’ve also found myself with a sudden urge to get my house in order — just, you know, in case. Insurance, wills, that sort of thing. Sixty is when you stop pretending you’re going to live forever. You’re officially old. Or at least old-ish.

The only thing I haven’t dealt with on my to-do checklist is retirement planning. The reason is simple: I’m not planning to retire. More accurately, I can’t retire. My 401(k) plan, which was supposed to take care of my retirement, is in tatters.

Like millions of other aging baby boomers, I first began putting money into a tax-deferred retirement account a few years after they were legislated into existence in the late 1970s. The great bull market, which began in 1982, was just gearing up. As a young journalist, I couldn’t afford to invest a lot of money, but my account grew as the market rose, and the bull market gave me an inflated sense of my investing skills.

I became such an enthusiast of the new investing culture that I wrote my first book, in the mid-1990s, about what I called “the democratization of money.” It was only right, I argued, that the little guy have the same access to the markets as the wealthy. In the book, I didn’t make much of the decline of pensions. After all, we were in the middle of the tech bubble by then. What fun!

The bull market ended with the bursting of that bubble in 2000. My tech-laden portfolio was cut in half. A half-dozen years later, I got divorced, cutting my 401(k) in half again. A few years after that, I bought a house that needed some costly renovations. Since my retirement account was now hopelessly inadequate for actual retirement, I reasoned that I might as well get some use out of the money while I could. So I threw another chunk of my 401(k) at the renovation. That’s where I stand today.

When I related my tale recently to Teresa Ghilarducci, a behavioral economist at The New School who studies retirement and investor behavior, she let out the kind of sigh that made it clear that she had heard it all before. The sad truth, she told me, is that I’m the rule, not the exception. “People have income shock, like divorce or loss of a job or a health crisis,” and those crises tend to drain retirement accounts, she said.

But even putting income shocks aside, she said, most human beings lack the skill and emotional wherewithal to be good investors. Linking investing and retirement has turned out to be a recipe for disaster.

“People tend to be overconfident about their own abilities,” said Ghilarducci. “They tend to focus on the short term rather than thinking about long-term consequences. And they tend to think that whatever the current trend is will always be the trend. That is why people buy high and sell low.”

Because I don't want to reprint the entire article, I'll now flash forward to the money quote, so to speak:


What, then, will people do when they retire? I asked Ghilarducci. “Their retirement plan is faith based,” she replied. “They have faith that it will somehow work out.”

In yesterday's post, I asserted that people who have bought houses in the past couple of years in the mistaken belief that the "bottom was in" on the housing market are like sheep being led to the slaughter because of their blind optimism. This column makes it plainly apparent just how widespread the problem really is. Obviously, I don't know Joe Nocera, but if he is writing op-ed pieces for the New York Times he must be a pretty smart guy. If he got tripped up by his own stupid blind faith, what hope is the for the average mope?


Bonus: I may end up linking to every song on this album before its all over