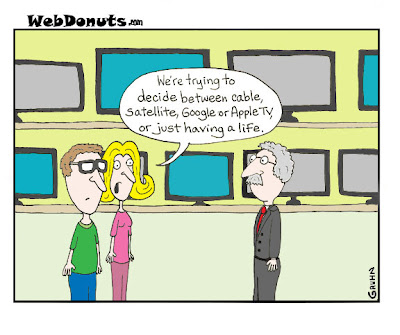 Bad enough that idiot box has become little more that a corporate propaganda machine aimed at idiots...but the idiots now have to pay more than ever before for the privilege of being brainwashed. Here is MSNBC with the details:


If you're one of those people who complain that there’s nothing to watch on TV today even though you have a gazillion channels, you’re not going to be happy with this news – turns out, you’re paying more for cable.

The monthly rate for pay TV has been rising at an average of 6 percent annually and hit $86 a month last year for basic pay and premium-channel TV, according to a reported released Tuesday by market research firm The NPD Group. The uptick in licensing fees - which are the fees cable and satellite providers pay for programs - is driving much of the increase, at a time when consumer household income has hardly budged.

The study was based on a quarterly electronic survey of 1,000 U.S. households.

Not surprisingly, the rising costs are making many consumers pull the plug on premium television. Today, there are five million fewer U.S. households viewing pay-TV services due to the mortgage crisis, the NDP research found, adding that those who did cancel service were prompted to do so because of economic reasons. But overall, the number of pay-TV subscribers has not declined substantially because of “bulk-service pay-TV contracts with apartment complexes and homeowners’ associations that have allowed pay-TV operators to retain subscriptions in vacant homes,” the study said.

Among the pay-TV cord cutters, most are still viewing their favorite shows via free Internet TV, traditional free broadcasting, and video-on-demand services such as Netflix, NDP reported.
The growth of lower-cost options, as well as cash-strapped consumers, is the reason the total number of subscribers of paid TV dropped to 100.9 million in the second quarter of last year, compared to 101.4 million in the ﬁrst quarter, according to a IHS Screen Digest report released in September.

“As pay-TV costs rise and consumers’ spending power stays flat, the traditional affiliate-fee business model for pay-TV companies appears to be unsustainable in the long term,” said Keith Nissen, research director for NDP. “Much needed structural changes to the pay-TV industry will not happen quickly or easily; however, the emerging competition between S-VOD (subscription video-on-demand) and premium-TV suppliers might be the spark that ignites the necessary business-model transformation of the pay-TV industry.”

Indeed, something’s got to give: $200 a month for cable may end up getting some consumers pulling out their dusty old rabbit ears; that is, if they still work with digital TV.

I linked to a story just the other day which explained that one of the big reasons for the increased fees is that billionaire-owned professional sports teams are charging more and more money for the rights to broadcast their games so they can afford to pay their multimillionaire athletes. It looks like the greedy assholes who run the media and entertainment industry won't be happy until they have squeezed the last dime out of the idiots and the whole industry collapses.


Bonus: Released a half-century ago, this song is still as relevant now as it was then despite the dated references