Q: Is Marco Rubio Ineligible To Be Romney's VP? A: Who Gives A Damn? 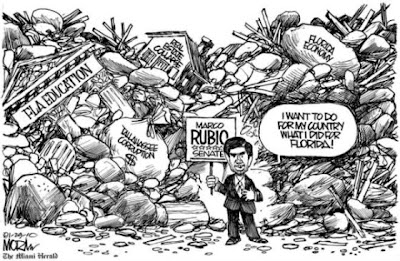 Fellow blogger and all around irascible economic naysayer Karl Denninger put up a rather histrionic post this past Tuesday stating emphatically that Florida Senator Marco Rubio, currently considered among the front runners to be named by Willard Mitt Romney as his Vice Presidential candidate, is in fact not eligible for the office. Rather than me risking putting words in Karl's mouth, I'll let him tell you himself:


Folks, cut this crap out.

Here are the facts:

He therefore must not be nominated as VP, since the primary qualification for that office is the ability to stand as President if something happens to the President while he is in office.

But no person constitutionally ineligible to the office of President shall be eligible to that of Vice-President of the United States.

I know there are people who think the Constitution shouldn't read this way on natural born citizenship as a requirement for this office, but it does read this way AND IS WHAT IT IS.

If you want to change this the proper thing to do is to amend The Constitution before you run someone who is currently ineligible. Circumventing it as was done with Obama is wrong, no matter which party does it.

We've had enough lawlessness in this country at the top and we are way past the point where we should be tolerating it in any fashion, irrespective of whether you happen to like someone or not.

I am not going to recreate all of the bolding and italics Karl uses in his original post, and it actually reads a bit less hysterical without it. But you get the idea.

As for Denninger himself, I read his blog regularly even though I only agree with about half of what he says. He fascinates me not only because he has been sounding warnings about collapse since before the crash of 2008, but because I know of no other writer who can veer so wildly back and forth between being so spot on and being so spectacularly wrong--even sometimes within the same blog post. What Karl really is is a rabble-rouser, and the world can always use more of them to get people thinking, even if they have a spotty track record.

What is cute about this post is that despite five years or more of writing about how the country is going completely to hell thanks to the venality, avarice and greed of our government and business elites, Karl still seems to think the system can be saved if only we could get the right person into office. Since Karl is all freaked out about whether Marco Rubio is eligible to be Vice President or not, I thought I would take a moment to remind him of a little history.

First of all, and this is very obvious but I will state it anyway, the American people do not elect the president. The president is in fact chosen by the Electoral College, a tiny group of ironically unelected people that nobody knows who gather together a month and a half after the masturbatory November balloting and actually choose the President. Theoretically, the votes of the general public are supposed to be reflected in the Electoral College vote, but that doesn't always happen. In 1876 and 2000, the political system conspired using the Electoral College as an excuse to deny the candidate who polled the most votes nationally. If America truly had free and fair elections by majority (or at least plurality) rule, Samuel Tilden and Al Gore's busts would be lining the Hall of Presidents and Rutheford Hayes and George Bush the Lesser would be modern day trivia questions. Lawlessness in this country is nothing new, Karl. The elites have practiced it throughout this nation's history whenever they have seen fit.

But more importantly, in the grand scheme of things what difference does it really make whether Shrub Bush lost his election by half a million votes and was installed by judicial fiat, or whether President Hopey-Changey's birth certificate was forged, or whether Williard Romney's father was born in a Mormon polygamist's encampment in Mexico or whether Marco Rubio parents were U.S. citizens at the time of his birth? If the elites want those fuckers to be the President and/or Vice President, they will be nominated by one of the two major parties. And the big business, war and empire agenda will roll merrily along no matter which side wins.

But I saved Karl's most priceless line for last, and even left in the all caps and bolding this time:


THE RULE OF LAW MUST STAND ABOVE THE "DIVINE RIGHT OF KINGS" OR THIS NATION IS NO LONGER A CONSTITUTIONAL REPUBLIC.

America hasn't been a Constitutional Republic anywhere but on paper since at least the day Bush the Lesser was installed into office by the Supreme Court, and arguably much farther back than that. If that basic truth has not yet sunk in, Karl, then you are far more hopelessly naive than I would have taken you to be from reading your blog.


Bonus: "I don't wanna vote for your president...I just wanna be your tugboat captain"