Palatka, Florida: "It Has Been Going Down Hill Rapidly Around Here" 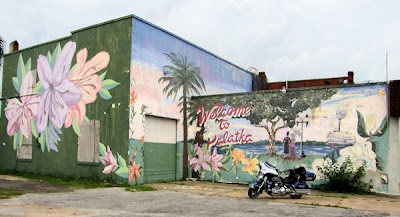 At first, this appeared to be yet another mass layoff story involving a call center. But then the article from First Coast News went of to describe the economic devastation being wrought upon one Florida community:


Allorica Incorporated, which is based in California, announced it is closing its call center in Putnam County. A total of 289 people work at the facility, which is being closed on June 29th.

"It's very dissapointing," said Palatka Mayor Vernon Myers. "They were a good corporate citizen, they were a large employer. We're going to feel the effect of their closing."

Company spokeswoman Danel Kuhlman said a change in client requirements forced the closing. Employees will be offered any available jobs at other facilities. They operate 7 in Florida.

Employees would not talk to First Coast News on camera, saying they were not to talk to the media. The company is also offering resources to assist in resume building and interview skills.

Harry Gillean operates Andrea's Bookstore nearby and launched his own going out of business sale 3 weeks ago. He'll be laying off 3 workers. The call center closing is just more bad news, he says. "Another nail in the coffin. Earlier, we lost 700 jobs at Georgia Pacific, the school board is laying off, water management recently lost 200 employees, so it has been going down hill rapidly around here."

Leave it to the guy who owned the bookstore to connect the dots. Much better than the town's idiot mayor:


Mayor Myers thinks this is just a blip in the local economy for now. He's seeing economic progress in the area. Allorica replaced a company that closed before, and he is confident they can attract another to Northeast Florida.

"We feel optimistic something will be on the positive side in the future," said Myers.

Maybe the bookstore guy should run for mayor next time around, and then maybe this beleaguered community might have someone in charge who is realistic about the very dire problems it faces.