GSA Scandal Addendum: What I Did On My Taxpayer Paid Las Vegas Vacation 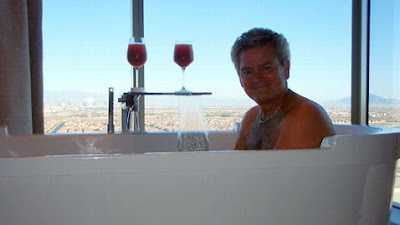 Protip: If you are a government official who wastes a shit pot load of taxpayer money taking completely frivolous trips to Las Vegas with your wife, you should probably make sure wifey doesn't post the vacation photos on the internet. Here is Atlantic Wire with the story:


G.S.A. regional commissioner Jeffrey Neely had a rough Monday as he very publicly invoked his 5th Amendment rights during a Congressional hearing into his agency's spending scandal, and photos of he and his wife doing all that aforementioned spending leaked around the internet, thanks to ABC New's Jake Tapper.

Neely's wife posted photos of their trip to the Las Vegas M Hotel in 2009 on her Google+ account. The trip was one of eight pre-conference "scouting" forays the agency apparently required just to make sure they weren't, you know, wasting $800,000 of taxpayers' money on hotel with small tubs or bad views. Judging from Neely's contented smile in the hotel tub, they weren't. (Insert your own "in hot water joke" here.)

We'd like to think being a hotel scout for your agency's indulgent conference is about as awesome a job as testing all the well-fed king's food for poison. That's to say, it's pretty awesome gig, until you get poisoned, or, in Neely's case, you get a Congressional hearing and possible criminal investigation. As the executive responsible for the conference itself, he was subpoenaed to testify Monday for the House Oversight and Government Reform Committee, and as expected, he took the Fifth and was quickly dismissed from the hearings. Perhaps it was the best legal move, but choosing silence over self-incrimination never plays very well in the press.

You want a real laugh? From Wikipedia, here is the mission statement of the General Services Administration:


The General Services Administration (GSA) is an independent agency of the United States government, established in 1949 to help manage and support the basic functioning of federal agencies. The GSA supplies products and communications for U.S. government offices, provides transportation and office space to federal employees, and develops government-wide cost-minimizing policies, and other management tasks.

Truth is not only stranger than fiction, sometimes it is downright absurd.