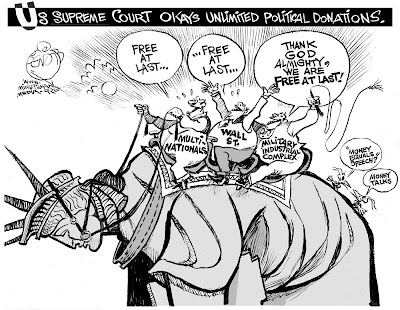 Return with me now to the year 1972. That was quite a tumultuous time in America. The Vietnam War was winding down, a controversial new sitcom named All in the Family topped the Neilson ratings and had tongues wagging around water coolers all across the nation, a young filmmaker named Francis Ford Coppola scored his first big success with The Godfather, starring a young, unknown actor named Al Pacino…oh, and incumbent President Richard Nixon scandalized the nation by raising the then-unprecedented sum of $40 million for his reelection campaign, much of it from wealthy, fat cat donors.

Nixon, of course, got into hot water not so much for the obscene amounts of money his campaign raised that year but because his operatives used a portion of the dough to finance a succession of dirty tricks, including the Watergate break in, that ultimately resulted in his resignation in 1974. That same year in the wake of the scandal, Congress created the Federal Election Commission and placed a hard cap on the amount of money individual donors could give to campaigns. With periodic tweaking, the 1974 campaign finance measures remained the law of the land until the Supreme Court’s 2010 Citizens United ruling, which effectively eliminated any limits on campaign donations and turned the clock back on 40 years of earnest but ultimately doomed attempts to eliminate the effects of big money on politics.


Mitt Romney's campaign has set a fundraising target of $800 million for this election cycle, setting up a race with President Obama that could see each side spending more than $1 billion by November. It also guarantees that, for the first time in a generation, neither candidate will accept public financing for their campaign.

The new "Romney Victory" fund — which we first mentioned yesterday — is a collaboration between the Romney campaign and the Republican National Committee that, according to The New York Times, hopes to raise $500 million in donations from big-spending donors and "bundlers." They also hope to gain another $300 million in smaller contributions directly to the campaign. Add in another $200 million in Super PAC money (which is technically independent of the Republican effort, but will be spent by outside groups opposed to the President) and that could mean more than $1 billion spent in an effort to unseat the incumbent.

Of course, they have their work cut out for them. Romney, who had to fight a primary challenge against a large field of fellow Republicans, has "only" raised about $86 million so far. More money will certainly flow to him as the general election heats up and those who have been willing to support him so far latch on to the nominee. But President Obama has already raised around $350 million for his efforts, most of which has been sitting and waiting for an opponent that he can bury under it. He raised $53 million in March and he hasn't even really started campaigning yet. Considering that he raised $750 million in 2008, despite splitting Democratic support in a bitter primary fight himself, another billion from his side is also pretty likely.

No matter which side wins the money war, there's no doubt that this will be the most expensive presidential campaign of all time, dwarfing the races from even just four years. In that race, the two nominees — Obama and John McCain — set records by breaking the $1 billion mark between them, but that sum is no longer enough for even one candidate. And that doesn't even begin to account for the outside money that will also flood airwaves this fall. The totals have become so staggering that they almost defy complaints from those who wish to see someone put the brakes on money in politics. With so much being spent and seemingly no hope for reform, Americans may just have to resign themselves the fact that the money game is impossible to beat.

I never thought I would ever say this, but I agree completely with the Atlantic Wire on this one. The fact is that Americans DO need to resign themselves to the fact that the money game is impossible to beat. The only way Citizens United could be overturned is with a Constitutional Amendment, and that has zero chance of happening in a political environment in which no measure that does not have at least 61% support needed to end a filibuster has any chance of getting past the hopelessly gridlocked Senate. And even if it somehow managed to squeak through the two houses, it would still need 75% of the state legislatures to pass it in order for it to be adopted. I have about as much chance of landing a date with Megan Fox as that does ever happening.

The first takeaway lesson from all of this for the average American is that they should never, ever donate money to a political campaign. A puny $100 or even $1000 check will buy you exactly ZERO influence when there are billions of dollars at stake. How much harder do they need to hit the voters over the fucking head before they finally recognize the truth? Save that cash, or give it to a worthy charity if you must. Heck, buy a copy of my book. I swear I’ll only spend the proceeds on beer, which is a promise far more likely to be kept than anything which will emit from Obama or Romney’s pie holes during the course of the campaign.

The second lesson should be perfectly obvious and I’ve said it here many times, but I’m going to say it again because so few people have gotten it through their think skulls. The millionaires and the billionaires now own the political process lock, stock and barrel. Yes, the votes are still tallied up on Election Day, and with the exception of a few hanging chads or Diebold shenanigans, the candidate with the majority or a plurality of them usually wins. The problem is that it no longer matters regarding any issue of real importance who the winning candidate is. The game is completely rigged in the nomination process of the two major parties. The general election is nothing but an elaborate stage show put on for benefit of the partisan zealots, the hopelessly naive and the utterly distracted, who between them constitute the overwhelming majority of the voting public.

It is too early to say for sure how this election is going to shake out, but here is one prediction I will make with 100% confidence. On January 20, 2013, the president-elect will raise his right hand and take the oath of office with every intention of serving the interests of the wealthy elites who put him there over the interests of the tens of millions of voters who stupidly cast their ballots for him. The only thing we do not know for certain yet is which of the two major candidates will be the one who sells the rest of us down the fucking river for four more grueling years.


Bonus: Forgive me, but this song is too perfect NOT to use here