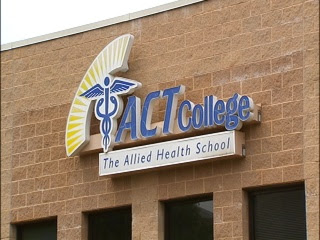 
Dreams were broken and students were left with crushing debt and nothing to show for it after ACT College abruptly closed its doors Tuesday.

In a letter to students and faculty, Jeff Moore, the president of the school that offered courses in medical assisting, health sciences and medical radiography at campuses in Alexandria, Arlington and Manassas, said the school was forced to close its doors after being denied recertification for federal financial assistance programs by the U.S. Department of Education.

Kaitlyn Zadroga moved from Millville, N.J., to learn to be a medical assistant, or MA, at the school’s Manassas campus and said she was looking to eventually make a life for herself as a nurse.

“I was going to be an MA and get my foot in the door and then be an RN. Apparently that’s not going to happen now,” said the 19-year-old Zadroga who joined 50 to 60 other students to protest at the school’s Manassas campus Wednesday.

Zadroga wasn’t the only student feeling there was nowhere to turn.

Lashanee Gaskins, had been at the school for five months and is on the hook for a $21,000 in student loans.

She said she got a text message Tuesday telling her that the school was closed indefinitely and that it was no longer certified.

“We’re out of our financial aid. People who have graduated have not received diplomas,” the 30-year-old mother of three said. “We’re stranded. We have nowhere to go. People are not accepting our credits from here to transfer, so we have to start all over.”

Gaskins said she gave up her home day-care business to attend ACT College and was looking to better her life.

“I just wanted something that was stable,” the Bristow woman said.

While some students got the letter from Moore saying that the college had worked with the federal Department of Education after a 2010-2011 audit left the school without financial assistance certification, others got phone calls telling them the school was closing. Still others learned of the closing through social networking sites.

Some didn’t find out until they showed up for classes Wednesday.

Sean Doheney, 29, a U.S. Army Reserves pharmacy technician studying radiology at the school, said the administration was heartless in not letting students know that it was having certification and financing problems.

“What they did to us is cruel to say the least,” said the 29-year-old Doheney, who spent $30,000 in grants and loans at the school and was only a few months away from graduating.

Moore’s letter also indicated that the family-owned business had been in negotiations to sell, but that the deal had fallen through when the department refused to release funds that Moore said were due the school.

In the letter, Moore said the department “threw up one last roadblock which caused the deal to fall apart.”

Right here you see yet another problem with private, for profit colleges that prey upon lower income students, loading them up with debt to obtain degrees of often dubious value. The article doesn't state why the Department of Education chose to pull the school's certification, but we can only assume given that shady outfits like the University of Phoenix and Kaplan University are still allowed to operate, there must have been some pretty bad management going on at the very least.
Posted by Bill Hicks at 6:24 PM