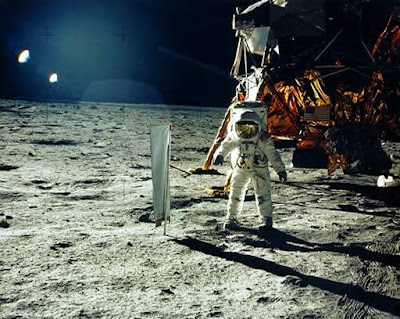 Sometimes, it is actually kind of amusing to observe well known figures who are completely immersed in the business-as-usual mindset as they flail about, trying to comprehend why things just don't seem to be working like they expect them to anymore. Take Astrophysicist Neil deGrasse Tyson, who was interviewed on MSNBC the other day and just can't fathom why America's space program is quickly disintegrating into irrelevancy. The Raw Story has the details:


Popular astrophysicist Neil deGrasse Tyson on Monday lamented that American culture no longer had a culture of innovation that prized scientific and technological discoveries.

Tyson noted on MSNBC that space exploration no longer captured American’s attention like it previously had. He blamed the lack of public interest on the lack of advances in the space frontier.

“You don’t have to be the scientist or engineer,” he explained. “You could be a journalist, an artist, but you start doing more stories about the frontier and all of a sudden everybody participates in inventing a tomorrow.”

“It’s the invention of tomorrow that is absent in today’s modern American culture,” Tyson continued.

“Tomorrow was everywhere in the 1960s, wasn’t it? The World’s Fair was all about tomorrow. And who enables that tomorrow? It is the scientific and technological literacy of a nation that does it. It is those innovations that are the engines of the 21st century economy.”

He added that private companies could not lead the space frontier, because of unknown risks and other factors that were detrimental to business.

“That is why governments are the ones that do the big first steps.”

I guess the fact that America has rung up over $5 trillion in new federal debt just in the past four years in a desperate attempt to to keep its economy afloat, to say nothing of the long term demographic trends which spell disaster for our major entitlement programs, must have escaped Mr. deGrasse Tyson's attention. The money to continue advancing the space program is not there...nor will it ever be there again. This serves as yet another example of how no matter how smart or accomplished a person my be in one field, it does not mean they have any clue about how things work outside that field.

Tomorrow is being invented by today's modern American culture, all right, just not in the way that Mr. deGrasse Tyson or very many others are anticipating. Our steadfast unwillingness to face our dire energy predicament virtually guarantees that we will be facing total economic collapse, likely within the next 20 years. The "innovations of the 21st century" are going to be among those who are successfully able to figure out how to adjust their lifestyles to enable them to survive in a world that will be rapidly powering down.


Bonus: "Space City is one hour up the road from me...one hour away is about as close to the moon as anyone down here is ever gonna be"