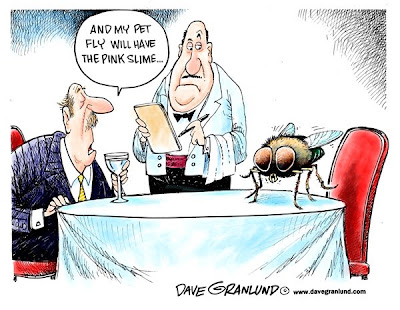 The headline above was my best New York Post imitation. Anyway, here's the story from Think Progress:


The meat industry has been hammered for the weeks after it was revealed that some companies had been controversially using beef scraps mixed with ammonia hydroxide, called “pink slime”, as hamburger filler. This week, one passionate defender of pink slime emerged: Rep. Steve King (R-IA).

As we know, King enjoys touting his carnivorous habits while beating up on people who don’t eat meat. But meat producers have also been major financial backers of King, who sits on the House Agriculture Committee, throughout his political career. A cursory glance at King’s fundraising records shows more than $45,000 in campaign contributions from the meat industry during his time in Congress. This cycle alone, two prominent PACs, the National Beef Cattleman’s Association and the National Council of Pork Producers, as well as Lynch Livestock, have already maxed out their contributions to King’s reelection campaign.

That money appears to have been well-spent. All this week, King has been defending pink slime — or “lean finely textured beef” as he calls it — to his constituents. Indeed, in every one of the half dozen town halls that ThinkProgress attended, King talked up pink slime unprompted. In Emmetsburg, for instance, he said pink slime was actually a “supplement” and an “enhancement.” In Algona, he pledged to hold congressional hearings not into pink slime, but into the “smear campaign” against pink slime.

How much do you want to bet that despite his meat obsession, asshole Representative Steve King has never in his life ever eaten Pink Slime? What's the matter with Iowa? How do you keep electing this fucking slimeball?


Bonus: Instead of Pink Slime, how about some Pink Floyd?