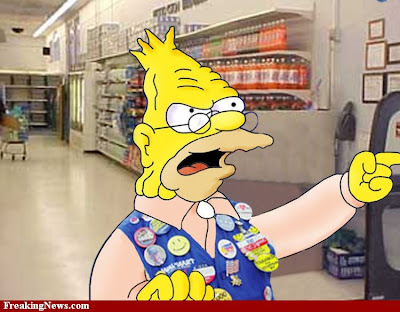 Regular readers will know that my sheer loathing for the predatory Walmart corporation knows few bounds. That said, even I had to laugh at the truly daffy conclusions reached by a report that appeared this week in Social Science Quarterly. Raw Story has the details:


The more Wal-Mart stores a county has, the more likely it is to have active hate groups in the area, according to Penn State economists.

“Wal-Mart has clearly done good things in these communities, especially in terms of lowering prices,” Stephan Goetz, professor of agricultural economics and regional economics, explained. “But there may be indirect costs that are not as obvious as other effects.”

The study, published in Social Science Quarterly, found that the number of Wal-Mart stores was a better predictor of hate group participation than the unemployment rate, high crime rates and low education.

The researchers believe that the correlation between Wal-Mart and hate groups exists because of breakdown of the community. Small local businesses are more likely to be members of civic groups and involved in the community. They are also more likely to have closer relationships among their employees.

“While we like to think of American society as being largely classless, merchants and bankers are part of what we could call a leadership class in a community,” Goetz said.

In contrast, people are more likely to feel alienated by big-box retailers like Wal-Mart, the researchers explained.

Hoo-boy, where to start on this one. Stretch Armstrong would have a hard time wrapping his arms around these findings. While the argument can certainly be made that big box stores have caused breakdowns in communities and lead to alienation among shoppers, asserting that they cause people to be more likely to join hate groups is a leap wider than the one Evel Knieval tried to make over the Snake River Canyon. Confusing association with causation is a basic logical fallacy, of course, and one you would think a couple of Penn State economists would scrupulously try to avoid.

There are a number of plausible reasons, in fact, why there might tend to be more hate groups in areas where there are more Walmarts that have nothing whatsoever to do with the company itself. One that I can think of right off the top of my head is that Walmarts predominate in smaller towns and cities that are usually less multicultural than the larger cities, and thus people who live there have far less exposure to those of other races, religions or national origin. People who live in such regions also tend to have less formal education on average because, as in my own case in having to leave my hometown for good after I graduated from college, there are far fewer white collar career opportunities available. Additionally, people living in such areas usually earn far less money and are less financially secure, which can cause them to look for scapegoats to blame for the dissatisfaction they feel in their own lives (though I would note that Walmart IS a factor in driving wages down, which directly contradicts the assertion made by Stephan Goetz above that Walmart's lower prices are a GOOD thing for these communities).

I think even the authors of this study realize that they are on shaky ground, because they qualified their conclusions with this statement:


“We’re not trying to pick on Wal-Mart,” said Goetz. “In this study, Wal-Mart is really serving as a proxy for any type of large retailer.”

“We doubt strongly that Wal-Mart intends to create such effects or that it specifically seeks to locate in places where hate groups form,” the researchers said.

What a relief it is that they only "doubt strongly" that Walmart is INTENTIONALLY responsible for their conclusions. Glad to know the billionaire members of the Walton clan don't secretly have Ku Klux Klan robes or SS Stormtrooper outfits tucked away in the back of their bedroom closets. Well, maybe. After all, the researchers didn't actually say they were willing to rule it out 100%.


Bonus: "I know politics bore you, but I feel like a hypocrite talking to you...and your racist friend"