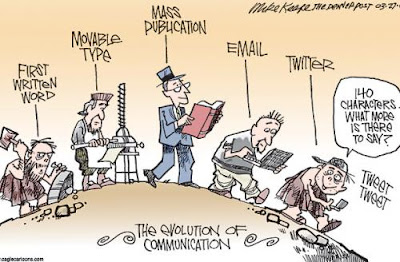 According to the old saying: "it is better to remain silent and be thought a fool than to open your mouth and remove all doubt." Maybe we should upgrade that to: "it is better to stay off of Twitter entirely than to send out messages showing the whole world what a fucking idiot you are."

There was a time not all that long ago when a person might say a dumb thing, but it at most would be heard by a handful of people and then immediately dissipate into the ether. There was no permanent record of it to come back and haunt the speaker, and even those who heard the words would probably not be able to completely agree as to exactly what was said.

But nowadays, thanks to the dubious miracle that is Twitter, millions of morons pollute the collective consciousness every single day with their "thoughts," giving the rest of us a horrifying glimpse at just how addle-brained many of our fellow citizens really are. I could do a whole separate blog just on this subject, of course, and put up about a dozen posts a day like some Twitter version of People of Walmart, but to prove my point I'll stick to the one example as reported by With Leather:


Depending on who you ask, the Cincinnati Reds probably gave up too much young talent in a deal for pitcher Mat Latos this offseason, but when Walt Jocketty wants a guy, he gets that guy, damn it. Unfortunately, Latos isn’t off to a hot start this season (0-2, 8.22 ERA) but in fairness he had to pitch against the St. Louis Cardinals last night and they pretty much own the 24-year old in his brief career in the majors. The Cards are now 3-1 against Latos since his rookie season, and his ERA in that span has too many digits for me to process without my Texas Instruments graphing calculator.

But who needs stats when criticizing a guy is just plain easier? At least that’s how some Reds fans looked at his awful game last night (5.2 innings, 8 ER) and they took it out on the person who deserved it most – Dallas Latos, Mat’s wife (Bill's note: sarcasm alert).

Wow...stay classy, asshole. Tweeting that sexist garbage to the pitcher's wife just because your sorry ass team is getting its head kicked in is bad enough, but notice that the moron is holding a baby, presumably his, in his Twitter picture.

Idiocracy, the movie, had it right. We're going to hell because the idiots are doing most of the breeding and the smart people are dying out: