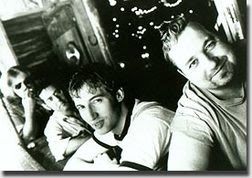 Several weeks ago, I posted the song "Anacostia" by the late, great alternative country band, The Hangdogs. At the time, I lamented that the band's outstanding musical tribute to former Vice President Henry Wallace's doomed 1948 progressive presidential campaign was not available on You Tube. Well, I decided to take matters into my own hands, and am now proud to present my first ever You Tube upload: "Wallace '48" by The Hangdogs. "No more hunger fear or A-bombs," indeed.

I actually have a cache of great indie rock and alternative country tunes from the 1990s and early 2000s that were previously too obscure for You Tube that I'll be uploading to my new channel in the coming weeks.