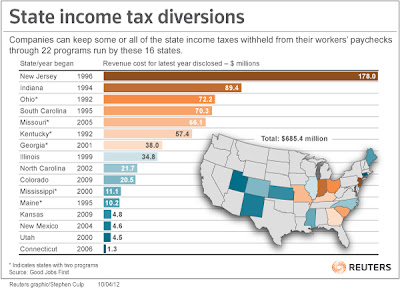 The next time you hear a wingnut conservative complaining about "welfare queens" sucking down the hard earned money of the taxpayers or griping and moaning about "socialism," here is a story from Reuters you can send to him or her as a counterpoint:


Deals cut with the states over the past two decades diverted $5.5 billion from public purposes to private gain, the report says. Close to $700 million more was diverted last year, Good Jobs First estimates.

New Jersey approved $73.2 million in new deals in 2011 on top of $178 million diverted that year alone under previous deals. I calculate that at nearly $80 per household in corporate welfare based on New Jersey’s 3.1 million households.

These deals typify corporate socialism, in which business gains are privatized and costs socialized. They also mean government picks winners and losers, interfering with competitive markets. Leaders in both parties embrace these giveaways because they draw campaign donations from corporate interests and votes from people who do not understand that they are subsidizing huge companies.

Michael Press, a Connecticut consultant on tax incentives, says such deals, however troubling, are an inevitable result of the U.S. Constitution setting up competition between the states.

“In an ideal world we would not provide any corporate subsidies,” Press told me. “It looks like corruption. But if you do it right, if you only target those companies whose behavior you change to create jobs or keep jobs in your state then these targeted temporary arrangements are cheaper – much cheaper – and can be more effective than an overall reduction in tax rates.”

The mission of Good Jobs First is making economic development subsidies accountable and effective. In years of working with their data I have always found it sound. While Greg LeRoy, Good Jobs First’s founder, has rooted out all sorts of hidden subsidies over the years, he emphasizes that he is not inherently hostile to them, only to secrecy, waste and what he calls job piracy and job blackmail.

“Job piracy” occurs when one state diverts taxes to lure an employer across state lines. AMC Entertainmentannounced a deal last year to move its corporate headquarters from Kansas City, Mo., to a nearby Kansas suburb. In return, Good Jobs First said, Kansas will let the multiplex chain keep $47 million of state income taxes withheld from its workers’ paychecks, a drain on public finances that did not create any jobs, but does enrich the Wall Street firms that own AMC including arms of J. P. Morgan, Apollo Management, Bain Capital and the Carlyle Group. AMC declined to answer my questions.

“Job blackmail” occurs when a company threatens to close a plant unless it gets tax money.

In Illinois, the law requires companies to threaten to leave before they can keep taxes withheld from paychecks. Motorola Mobility, now being acquired by Google; the truck maker Navistar; the German manufacturer Continental Tire, and three auto makers – Chrysler, Ford and Mitsubishi – get to keep $346.8 in taxes over 10 years because they threatened to leave Illinois. Navistar can pocket $62.1 million even if it fires a quarter of its Illinois workforce, its contract shows. A recent deal gives Sears $150 million, Good Jobs First reported.

Make no mistake, government has the means to put a stop to this nonsense. All that needs to happen is the 50 states all agree that none of them will grant this type of blackmail to the corporations. And the federal government could pledge to enact a prohibitive tariff on any company that sends its jobs offshore. It is also a fact that, however battered it may be, the American consumer market is still the largest in the world, and no corporation wants to lose access to that market. Government has all the leverage, it just chooses not to use it.

It will, of course, never happen because as the article points out the small army of corporate lobbyists with their large campaign checks in the state houses and in Washington collectively have more influence that the entire voting public. So expect more and more corporate welfare giveaways until the day finally comes when the whole corrupt, rotten edifice crumbles under it own weight.
Posted by Bill Hicks at 12:32 PM