The Exurbs Are Slowly Dying 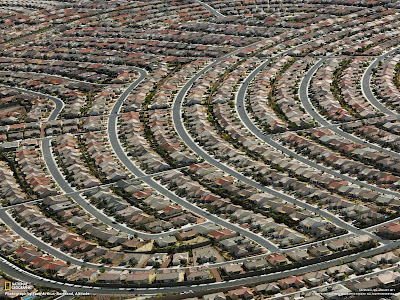 "The project of the American suburbs is the greatest misallocation of resources in the history of the world." - James Kunstler

Well, Jim, you have to be feeling pretty good about the recent vindication you received from an article that appeared last Friday in USA Today:


Almost three years after the official end of a recession that kept people from moving and devastated new suburban subdivisions, people continue to avoid counties on the farthest edge of metropolitan areas, according to Census estimates out today.

The financial and foreclosure crisis forced more people to rent. Soaring gas prices made long commutes less appealing. And high unemployment drew more people to big job centers. As the nation crawls out of the downturn, cities and older suburbs are leading the way.

Population growth in fringe counties nearly screeched to a halt in the year that ended July 1, 2011. By comparison, counties at the core of metro areas are growing faster than the nation as a whole.

"There's a pall being cast on the outer edges," says John McIlwain, senior fellow for housing at the Urban Land Institute, a non-profit development group that promotes sustainability. "The foreclosures, the vacancies, the uncompleted roads. It's uncomfortable out there. The glitz is off."

The fucking glitz? Pardon me for being so crude, but I live in a metropolitan area that is ringed by a huge band of exurbs that has been exploding over the past couple of decades. It is fucking UGLY, a vast wasteland of bulldozed fields and woodlands, tract homes, strip malls, megachurches, ribbons of new asphalt and horrendous traffic. What compels people to move to such godawful soulless places just so they have a bigger back yard is absolutely baffling to me.

There is perhaps no other phenomena the so clearly demonstrates just how far we have our collective heads shoved up our asses in this country than the exurbs. Think about it. America's rapid drive towards car-centric suburbification after World War Two was short-sighted enough, but at least then we had the excuse than we had never before experienced an oil shock. Then in the 1970s, we received two major shots across the bow in the form of the 1973 and 1979 Middle East oil supply disruptions. Those should have served as a warning that a automobile-dependent transportation infrastructure was ultimately not sustainable. So what did Spoiled Rotten Nation do in response? As soon as oil prices began to fall, we doubled down on our stupidity by building ever farther flung and even more car dependent communities as well as starting to buy gas hogging minivans and SUVs.

The building of exurbia, in fact, went into overdrive during the housing bubble years this past decade leading right up to the next major round of oil shocks. Instead of putting the brakes on sprawl as we were so clearly warned that we should do, we petulantly stepped on the accelerator and ran headlong right into the brick wall of peak oil and permanently high gasoline prices.

Nevertheless, this being a mainstream media article, it fudges on sounding any kind of warning about our real predicament:


"This could be the end of the exurb as a place where people aspire to go when they're starting their families," says William Frey, demographer at the Brookings Institution. "So many people have been burned by this. … First-time home buyers, immigrants and minorities took a real big hit."

During the '70s gas shortage and the '80s savings and loan industry crisis, some predicted the end of suburban sprawl. It didn't happen then, but current trends could change the nation's growth patterns permanently.

Aging Baby Boomers, who have begun to retire, and Millennials, who are mostly in their teens and 20s, are more inclined to live in urban areas, McIlwain says.

"I'm not sure we're going to see outward sprawl even if the urge to sprawl continues," he says. "Counties are getting to the point that they don't have the money to maintain the roads, water, sewer. … This is a century of urbanization."

First of all, Mr. McIlwain, the Millennials are not drawn to the cities because of any particular change in the American mindset. They are being drawn there becuase they are graduating from college with massive student loan debts into the worst jobs market since World War Two and thus they cannot AFFORD to buy a fucking house. Secondly, this isn't going to be the "century of urbanization." It is instead going to be the century of decentralization and economic collapse. When the day finally comes that the just-in-time delivery support systems for the urban areas cease functioning, both the exurbs AND the central metro areas are going to become very bad places to be for anybody.