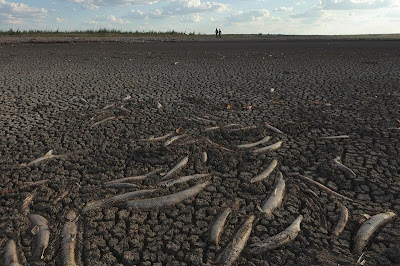 Warnings about potential future water shortages have been sounded repeatedly for many years now, but we are only just beginning to see their reality starting rear its ugly head. The Weather Channel just this week posted a story outlining the regional water war flare ups that are already occurring within the United States:


Americans have enjoyed centuries of abundant natural resources, but when it comes to fresh water that may no longer be the case. Recent droughts in the southern and western United States have exposed a mismanagement of nature's most valuable resource. Now the fight for clean water is heating up.

States have always fought over rivers and lakes, but lawsuits don't yield more water. Early laws and agreements were based on the assumption there would always be enough water to go around, but Americans are quickly learning that's not the case.

Many reservoirs were built to control flooding, and help farmers irrigate their crops. But those reservoirs became popular places to live and recreate, increasing the demand for water to stay locally to sustain the booming economies.

There may never be a definitive resolution to this conflict, but one thing is clear. Americans will soon be forced to decide how to allocate our most valuable resource, and adapt to the ensuing culture shift.

The article then goes on to describe each in detail. Here are the ones they identified:

More details are available at the link for the story.