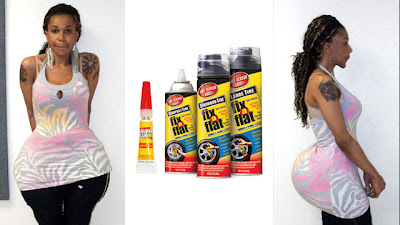 image: trust me, I'm a doctor. Don't you see my white lab coat?

Good morning. It's not just Sunday but Easter Sunday, meaning that the blog traffic will almost certainly take a double hit today in terms of page views. So I beg your kind indulgence if instead of my usual from-the-wilderness rant about America's hopeless economic, political and energy predicaments, I indulge in a topic that's a bit more humorous. At first glance, this article from a local Florida television station appears to be one of those run-of-the-mill, "Gawd, how can people be so STOOPID" stories the media never seems to tire of running. But if you scratch beneath the surface, there is something else going on here that is frankly illustrative of where we are headed as a nation:


A Tampa woman claims a fake plastic surgeon ruined her life after injecting her buttocks with fix-a-flat and cement.

Patients of Oneal Ron Morris, known to them as "Goddess", claim the woman said she worked for a plastic surgeon and knew how to perform procedures like butt injections.

Some of you may remember when the original arrest happened in this case a few months ago because it got a lot of media play at the time. If so, I'm sure you were probably wondering like I was how anyone could be so dimwitted as to allow their ass cheeks be injected with fix-a-flat and cement. Well, now we know the answer:


"She had a white coat on and a little badge, so I felt comfortable with it," the woman said.

Okay, I'll admit that I laughed when I read that. It's hard not to. But then it got me to thinking about how what this unfortunate woman really did was put her blind faith into someone she thought was an authority figure. Is that really any different than what a majority of her fellow citizens do every single day, innocently trusting that the politicians, the government, the corporations, the big banks, their stock brokers and the media have their best interests at heart? I really don't think so.

The article then goes on to describe what caused the desperation of the victim in this case:


The woman, who doesn't want to be identified, lost her job as a mortgage broker when the market crashed and started dancing at strip clubs to make quick cash. She soon learned a bigger backside would boost her business...

If you think about it, the fact that someone who was educated enough to be able to work as a mortgage broker could subsequently do something this breathtakingly dumb explains an awful lot about the housing bubble. And when the bubble finally popped she then turned to a far more desperate measure to try and maintain her lifestyle. There was only one little problem with her brillant idea to enhance her revenues from stripping:

"She said it was 100% silicone," the woman said of the substance Morris kept in a Pedialyte bottle.

Okay, five grand is not an insubstantial amount, but it doesn't seem like it would take that long to save up for it. But the idea of saving up for something you really want is an anathema to most people in Spoiled Rotten Nation. So instead she decided to take a very risky shortcut. Again, it was a decision not that much different that those who run up massive credit card debts to buy what they want NOW, with no thought about how it will cripple them financially in the future.

Like those people who binge with the credit cards, at first it seemed like a great thing that she saved all of that money on a real plastic surgeon, until reality began to set in:


Immediately after the injections she and four others underwent in 2009, the woman says she was pleased.

She raked in thousands of dollars more at work, and liked the way her backside looked.

But within six months, she started coughing. That turned into pneumonia. When doctors tested fluid in her buttocks, she says she learned the "100% silicone" was 100% something else.

"It came back as bathroom caulking," she said. "You would put a substance in me to kill me? It's not fair to me."

She claims Morris, now facing several more charges of practicing medicine without a license, used super glue on her during the procedure.

"It's to block the holes so the medicine doesn't come back out," she remembered Morris explain. "I said, 'Why is it burning like that?' She said, 'That's just the medicine. That's how the medicine feels. It's normal.'"

In addition to pneumonia, she had discoloration of the skin and a rear-end she describes as "rock hard".

And ultimately, her fate is not that much different from those who run up their credit card bills:


Unable to work, or barely sit anymore, she relies on food stamps, her house facing foreclosure.

She still has the fix-a-flat injection in her because, she says, her case never reached a severe enough level for insurance to consider it anything but elective reconstructive surgery.

Most people who read this story will just laugh at this woman's stupidity, confident that such a thing could never happen to them because they are way too smart to ever be taken in by such a huckster. Instead, they will go on trusting that their stock portfolio is a sound investment, that their employer will never renege on their pension, that their savings account at Bank Of America is perfectly safe, that Social Security will be there for them when they retire, that the media cannot report a story if it isn't true, that the government would never manipulate economic indicators, that billionaires really are job creators, that wars of choice are necessary for the nation's "defense," that either Obama or Romney will keep all of his campaign promises and that America is the greatest nation the world has ever seen and nothing could ever possibly cause its downfall.
Posted by Bill Hicks at 8:04 AM