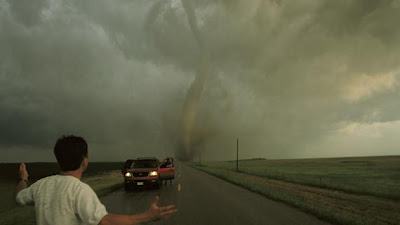 The headline above is not mine, but the one that actually appeared above this article from the Maine Sunday Telegram:

Now add to that what many agree is a new and growing danger on the edge of the violent vortexes: people -- hundreds and hundreds of regular people.

People risking their lives, gawkers clogging roadways, some with kids in the backseats of their cars or in the beds of their pickups. They sit poised with cellphone cameras, stop dead in the middle of lanes beneath roadway bridges, travel at breakneck speeds for the chance to get up close and personal with one of nature's most awesome and awful displays.

Kansas' Chancy Smith, the director of emergency medical services for Dickinson County -- raked by a series of tornadoes April 14 -- caused a minor storm of his own when, after the tornadoes, he publicly called the throng of chasers who flooded his county "morons" for risking their lives and possibly the lives of others by impeding emergency services.

Raked by quick rebuke, Smith has since said he did not mean to malign legitimate storm spotters and chasers or scientists who do much to help the National Weather Service predict and track major storms.

They're talking about the others, the hundreds of rubberneckers, gawkers and severe-storm shutterbugs who clogged the exit off Interstate 70 as the tornado swept past Solomon, Kan., parked as if they were at a drive-in movie.

Meanwhile, he said, his firefighters clocked others tearing 60 mph and more through the tiny town in pursuit of the twister like they were kids after a lost balloon. He said some drove, rumbling past fire trucks and over downed, live power lines where a damaged natural gas facility was spewing the explosive gas.

"There were morons out there. There were plenty," Smith reiterated to The Kansas City Star on Wednesday. "I was a police officer for 17 years and a director of emergency services for seven, and I have never, ever seen that many people converge on a storm. There were hundreds and hundreds ...

"My cohorts in other communities are saying, 'Don't apologize for what you said. We have all had this problem.' "

It has certainly hit a nerve among emergency services people and longtime storm chasers who concede that, in recent years, it seems that witnessing tornadoes up close has turned from a risky endeavor attempted by adrenalin addicts to a family spectator sport. Local high school students looking for tornadoes using apps and websites on their smartphones have become common.

"I really couldn't tell you why it's occurring," said S. Joe Koch II, the emergency management director in Saline County, Kan. "It is becoming more common for people to go out and see these tornadoes."

So common, in fact, that when the National Weather Service issued its early warning for last weekend, alerting the public that scores of tornadoes were likely to sweep through Tornado Alley -- the area between the Appalachian Mountains and the Rocky Mountains where tornadoes are most frequent – Koch sent out an alert of his own to emergency personnel: Expect an influx of people.

Meteorologists and others said the reason is clear: technology, TV news and entertainment.

It is no doubt just a matter of time before one of these idiots causes a fatal accident or gets killed getting too close to one of these storms. Because that's what natural disasters have become in this addle-minded, entertainment obsessed culture of ours--just another spectacle to be treated as if it were on a teevee screen and not a very real tragedy for those whose lives are torn apart right in front of the morons who are chasing the storms. This almost makes me root for higher gasoline prices to help put an end to such stupidity.


Bonus: "And as it came towards me, I swear, it sounded like a train"