The "Walmart of Weed" is Opening in Washington 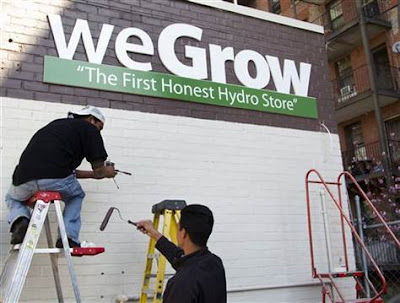 When a government refuses to acknowledge either public sentiment or common sense in a certain area of the law, the people start finding creative ways to undermine the very same law. It happened during the prohibition years, and it is gradually happening again. Here is the Washington Post with the story:


A company dubbed the “Walmart of Weed” is putting down roots in America’s capital city, sprouting further debate on marijuana — medical or otherwise.

Just a few miles from the White House and federal buildings, a company that candidly caters to medical marijuana growers is opening up its first outlet on the East Coast. The opening of the weGrow store on Friday in Washington coincides with the first concrete step in implementing a city law allowing residents with certain medical conditions to purchase pot.

Like suppliers of picks and axes during the gold rush, weGrow sees itself providing the necessary tools to pioneers of a “green rush,” which some project could reach nearly $9 billion within the next five years. Admittedly smaller than a big box store, weGrow is not unlike a typical retailer in mainstream America, with towering shelves of plant food and vitamins, ventilation and lighting systems. Along with garden products, it offers how-to classes, books and magazines on growing medical marijuana.

“The more that businesses start to push the envelope by showing that this is a legitimate industry, the further we’re going to be able to go in changing people’s minds,” said weGrow founder Dhar Mann.

Although federal law outlaws the cultivation, sale or use of marijuana, 16 states and the District of Columbia have legalized its medical use to treat a wide range of issues from anxiety and back pain to HIV/AIDS and cancer-related ailments. Fourteen states also have some kind of marijuana decriminalization law, removing or lowering penalties for possession.

Nearly 7 percent of Americans, or 17.4 million people, said they used marijuana in 2010, up from 5.8 percent, or 14.4 million, in 2007, according to the Substance Abuse and Mental Health Services Administration. A Gallup poll last year found a record-high of 50 percent of Americans saying that marijuana should be made legal, and 70 percent support medical uses for pot.

Public sentiment is definitely swinging toward finally legalizing marijuana. In fact, one question I would want to ask the 20% of respondents to that poll with the inconsistent opinion about pot is why exactly do they favor the "medicinal use" of marijuana versus it being legal otherwise? How does someone enjoying a little weed in the privacy of their own home affect your life in any way whatsoever? So they should have to wait until they get a brain tumor before they can fire up a joint? That makes exactly no sense whatsoever.

It is long past time to change this country's insane marijuana laws and legalize it already. Taxing it like alcohol in cigarettes would also help cash strapped governments at all levels raise revenue. It's a win-win with very little downside. Except for the prudes, busy-bodies and fundie whack jobs who aren't happy unless they are all up in somebody else's business.


Bonus: Too bad Bill didn't live to see it