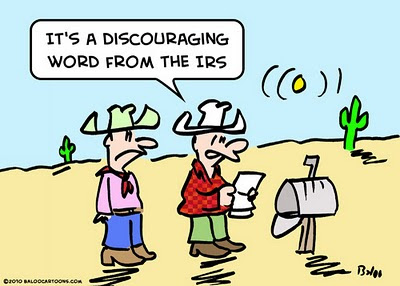 I know what you are thinking...why should I give a rip if the IRS is overworked and understaffed? Isn't that a GOOD thing? Well, not entirely. Here is azcentral.com with the details:


At 12:30 p.m. Monday, about 50 people waited for help at the IRS center in Fort Myers, Fla. Another dozen who couldn't find seats stood in a line that stretched out the office suite door and into a lobby.

At the walk-in center in East Harlem, N.Y., Belquis Castillo, 40, left in exasperation Monday afternoon after waiting more than an hour. Castillo needed copies of her 2010 tax return so her son can enroll in online college courses, but was told the computers were down.

The long waits are the result of the IRS' expanded workload and diminished workforce, says IRS Taxpayer Advocate Nina Olson, whose 2011 annual report identified inadequate resources as the most serious problem facing taxpayers. In 1995, the IRS had a staff of 114,018 to process 205 million tax returns. In 2010, it had 90,907 people to process nearly 236 million tax returns. For this tax filing season, the IRS has 5,000 fewer employees than it did a year ago.

"This is the lowest staffing level I've ever seen, and I've been with the IRS 26 years," says David Carrone, president of the Louisiana chapter of the National Treasury Employees Union (NTEU). The New Orleans Taxpayer Assistance Center has six employees, down from 12 eight years ago, Carrone says. Sometimes, it doesn't even have that many: Louisiana has several one-person walk-in centers, and when that employee calls in sick, someone from the New Orleans office has to fill in.

Increasing the IRS' budget has never been politically expedient, and the Republican Party's anti-tax message has made the agency even more unpopular, says Bruce Bartlett, an economist who worked in the Reagan and George H.W. Bush administrations. "Beating up on the IRS is never going to hurt you politically, regardless of which party you're in, and we're paying the price for this kind of attitude."

And here is the real problem for taxpayers:


Nonetheless, there are times when taxpayers or tax preparers need to talk one-on-one with the IRS, and that's becoming increasingly difficult, says James Smith, a certified public accountant and former chairman of the Texas Society of Certified Public Accountants.

Smith says the hold times for his calls to the IRS range from 30 minutes to an hour and 45 minutes. "I've had to ask my secretary to stay on hold so I can go to the bathroom."

Staff shortages have also delayed IRS responses to letters from taxpayers seeking to resolve issues or set up payment plans, according to the NTEU. Some of these hold-ups can result in financial hardship for taxpayers, Smith says. One of his clients waited four months to get his refund after Smith filed an amended return. During that period, the client almost lost his home to foreclosure, Smith says.

But the issue goes far deeper than just inadequate funding for the IRS:


Still, increasing the IRS' budget won't address a more fundamental problem, says Mark Robyn, an economist for the Tax Foundation, a non-partisan organization that supports low taxes. Currently, he says, the tax code is so complex that average taxpayers can't prepare their returns without professional help.

Olson agrees that the tax code is too complex, but says that's no excuse for poor service. If individuals with questions about their taxes can't get help from the IRS, she says, "you're really harming taxpayer trust."

Mary Wright, an IRS employee and president of the NTEU chapter in Colorado, agrees. "Most people want to be compliant," she says. "But the tax code is complicated, and they need help."

And what is the REAL reason why the tax code is so complicated? Because Congress keeps creating loopholes and deductions that largely benefit rich people. People for whom hiring an army of accountants and lawyers to prepare their taxes, not to mention making huge campaign donations bribes to their favorite congresscritters is still cheaper than paying what ought to be their fair share in taxes.
Posted by Bill Hicks at 12:45 PM