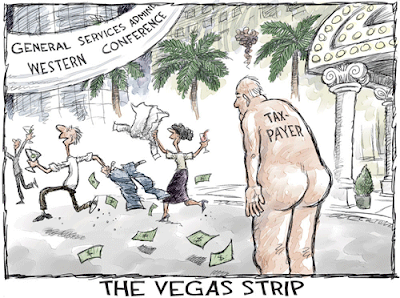 Maybe it isn't being repeated often enough so that the political appointee types in Washington are getting the message: America has a trillion dollar plus annual federal budget deficit that desperately needs trimming. Now is not the time to be blowing taxpayer money frivolously. Got it?

Well, apparently not. Here is the Atlantic Wire with the sordid details:


Martha Johnson, chief of the General Services Administration, and two of her top executives resigned today. You probably would too if you spent over $800,000 of taxpayer dollars on an extravagant "conference" off of the Las Vegas Strip. If you don't know the General Services Administration (GSA) was created to, in their words, "streamline the administrative work of the federal government" and it "oversees the business of the U.S. federal government." Somehow, Johnson and her crew parlayed those tenets into a "regional meeting" in Henderson, Nevada (having the discretion to not be at a hotel on The Strip--that's a modicum of modesty right?).

Thanks to an investigation and report from GSA Inspector General Brian D. Miller, The Washington Post, and the Associated Press, we now know how Johnson and her team spent all that money. Here's how it breaks down (keep in mind that in 2010, according to Inspector Miller's report, the meal and incidental expenses allowance was $71 per day):

$100,405.37 in employee travel costs to scout the event--meaning, these people returned to the Las Vegas area multiple times to visit hotels before settling on the fancy M Resort and Casino.

$1,500 for "Boursin scalloped potato with Barolo wine-braised short ribs" and a $525 bartender fee for a cash bar.

$1,840 for vests for the 19 “regional ambassadors” and other employees

$6,325 was spent on commemorative coins in velvet boxes to reward all participants for their work on stimulus projects (because a certificate and the $800,000 party they're at wouldn't do)

$75,000 for a “team-building” exercise — the goal was to build bicycles (which would later be donated to a Boys & Girls Clubs)

But, we felt this one deserves a special shoutout: "Another agency employee sought a discount on a $98 purse from the hotel gift shop. She received a $30 break," reported the AP. Because hey, when you're making it rain with $7,000 sushi, who has $98 dollars to spend on a tacky gift shop purse?

The very first question I had when I read this story was to wonder was this idiot's background is and what she was doing before Obama appointed her to the job. Fortunately, the Washington Post had me covered. First up, here is what Martha Johnson had to say upon taking office:


In her resignation letter, Johnson acknowledged a “significant misstep” at the agency that manages real estate for the federal government. “Taxpayer dollars were squandered,” she wrote. At the start of her tenure in February 2010 she called ethics “a big issue for me.”

Okay, that's a really funny joke. What could possibly top that? Well, how about her resume:

I swear, you really can't make this shit up. But I have an idea that might put a stop to this kind of garbage. Instead of just letting Johnson resign, stick her with the bill for the total cost of the conference. Then maybe the next asshole political appointee who takes her place might think twice before trying to so blatantly fuck over the taxpayers.

Addendum: This story has been ballooning pretty quickly. After I wrote the initial post, CNN posted this rather ridiculous update:


The same week that a report documented massive overspending at the General Services Administration, a video emerged Thursday showing an agency employee joking about the excess spending and saying he would never be investigated for it.

The video also mentions an awards program for employees that gave out $200,000 worth of taxpayer-funded iPods, electronics and gift cards to entry-level government employees.

"I buy everything your field office can't afford," raps the employee in the video. "I'll never be under OIG investigation."

OIG refers to the Office of the Inspector General, who originally looked into the GSA's spending on a 2010 training conference held in Las Vegas. His report found the federal agency spent $822,000 on the event, including $75,000 on team-building exercises, $6,000 on commemorative coins, and $6,000 on canteens, keychains, and T-shirts.

House Oversight Committee Chairman Darrell Issa's office, which is investigating the excess spending, received the video from the inspector general and released it to the public on Thursday.

The video was the winning entry in an employee video contest at the 2010 conference. In handing out the award for the video, the deputy commissioner of the Public Building Service appears to mock oversight of the GSA.

The revelations about the GSA's overspending are prompting outrage among lawmakers who are furious about taxpayer money being wasted. The inspector general's staff briefed congressional investigators Wednesday, and a source familiar with the briefing told CNN they were "pretty astonished at the blatant misuse of funds."

As it turns out, they aren't the only ones.