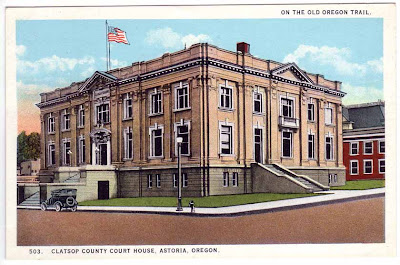 If you are a career criminal, you might want to consider relocating to the Great State of Oregon. Not only is the Beaver state closing prisons, and thinking about halting death investigations, but it is also experiencing mass layoffs in its court system. Here is the StatesmenJournal.com with the details:


Lines for services at Oregon courthouses could get longer as the court system moves ahead with elimination of 95 full-time positions by May 1.

The Oregonian reports the layoffs will mean fewer employees to accept payments for tickets, answer questions, pull files from archives and staff courtrooms.

The latest staff cutbacks will mean the loss of 296 positions since 2009, a 17 percent decrease, and it’s causing concern for the Oregon Judicial Department.

“People come to courts with life-changing problems: They’re accused of crimes. They might lose their homes. They’re being harassed or stalked,” said Phil Lemman, a department spokesman. “The more you scrimp and save on justice, (the more) philosophically troubling.”

Some positions were vacant as administrators anticipated budget problems, but dozens of current employees are expected to be laid off.

The overall department budget increased from $372 million to $424 million in 2011-13. However, much of the increase goes for judges’ salaries, which are protected in statute at $114,468 a year, plus courthouse security, law libraries and Oregon eCourt, a web-based court document system predicted to eventually cut staff time and save money.

State courts will be closed nine days over the two-year budget cycle that ends in June 2013. Also, employees will be required to take up to five additional days off without pay.

“This is a huge shock wave for the court,” he said. “It is an enormous organizational change.”

Yet another example of the slow collapse of the American criminal justice system.