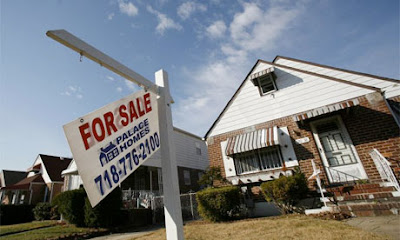 It is an established fact that one of the biggest drivers for the insane monetary policies of the Federal Reserve since the financial crash of 2008 was trying to save the crashing housing market. The Fed's zero interest rate policy has driven mortgage rates to historical lows below 4%, while the bank bailouts were designed, in part, to give lenders the capital to continue making home loans so the market wouldn't implode completely. The results have been, shall we say, less than impressive given that home sales and home prices remain mired near their post crash lows.

As if record low mortgage rates were not enough to entice buyers back into the market, in the media there have been repeated calls that "the bottom is in" on housing as a means of trying to convince people that they are no longer risk of losing money on their "investment." So how is the second part of the strategy to save the housing industry working out? Not too well, actually. Here is Reuters with the details:


More than 1 million Americans who have taken out mortgages in the past two years now owe more on their loans than their homes are worth, and Federal Housing Administration loans that require only a tiny down payment are partly to blame.

That figure, provided to Reuters by tracking firm CoreLogic, represents about one out of 10 home loans made during that period.

It is a sobering indication the U.S. housing market remains deeply troubled, with home values still falling in many parts of the country, and raises the question of whether low-down payment loans backed by the FHA are putting another generation of buyers at risk.

As of December 2011, the latest figures available, 31 percent of the U.S. home loans that were in negative equity - in which the outstanding loan balance exceeds the value of the home - were FHA-insured mortgages, according to CoreLogic.

Many borrowers, particularly since late 2010, thought they were buying at the bottom of a housing market that had already suffered steep declines, but have been caught out by a continued fall in prices in wide swaths of America.

Even for loans taken out in December - less than four months ago and the last month for which data is available - nearly 44,000 borrowers, or about 7.5 percent of the total, now find themselves under water.

"The overwhelming majority of the U.S. is still seeing home prices decline," said CoreLogic senior economist Sam Khater. "Many borrowers continue to be quickly wiped out."

The problem is not uniform around the country. In some areas, such as Washington, D.C., Miami and parts of northern California, prices are on the rise.

CoreLogic predicts the overall U.S. housing market will finally bottom out this year.

And the number of homeowners falling under water each month has decreased significantly since the peak of the financial crisis in 2008 and early 2009.

Still, Khater said, since October 2010 average home prices have fallen 7.4 percent. Overall, CoreLogic data shows that 11.1 million, or 22.8 percent, of U.S. residential properties with a mortgage are in negative equity, unchanged from the summer of 2010.

According to the S&P/Case-Shiller 20-city composite index, which tracks home values in 20 major U.S. metropolitan areas, U.S. home prices were down 3.5 percent in February from a year earlier and are now at their lowest level since late 2002. Over the past 12 months, 15 of the 20 major metropolitan areas monitored saw declines.

We in the reality-based community have, of course, been warning for years that anyone who believed the hype from the politicians, the media and corporate America about the phantom housing recovery were like sheep waiting to get sheared. Meet one of the lambs:


Jason Opalka took out an FHA-backed loan on his two-bedroom property in the suburbs of Orlando, Florida, in August 2010. He was helped by Certified Mortgage Planners of Orlando, who negotiated the FHA-backed loan with the lender, Freedom Mortgage, based in New Jersey.

Opalka was refinancing another FHA-backed loan he had obtained in 2008, for $196,000, then at an interest rate of over 6 percent.

Under the refinancing, he borrowed $192,278 at an interest rate of 4.5 percent. Opalka, looking at the paperwork, is still surprised at the down payment he had to make in 2010, for a property valued at the time for little more than the loan was worth and in which he had almost no equity.

Just how many times do people have to get beaten over the head after listening to the mainstream media before they finally wake up and realize that they are being played for suckers? It is bad enough that the snake oil is being peddled by the real estate industry. You would expect that, and if you have any common sense you won't trust a Realtor or a mortgage broker any more than you would a used car salesman. But having the federal government be complicit in the scam just makes it all the worse.

We have arrived at the point where all of the biggest frauds preying upon working and middle class families are now a combined effort of the banks, big corporations and the federal government. Mortgages and student loans are just two of the largest such swindles--and they very much tie in together since those who have been saddled with large amounts of the latter can hardly afford to take out one of the former, even at these insanely low interest rates.

How any impartial observer can look at what is happening in these sectors as not realize that a huge crackup is coming is beyond my puny powers of comprehension. Interest rates cannot fall much farther, and when they do finally start to rise, they are going to kill what little does remain of the housing market. Anyone inclined to believe the latest call from just this past week that "the bottom is in" and is planning to buy a house is a sheep not only about the be sheared but eventually slaughtered.


Bonus: The lambs are lying down on Broadway...and every other street in the U.S.