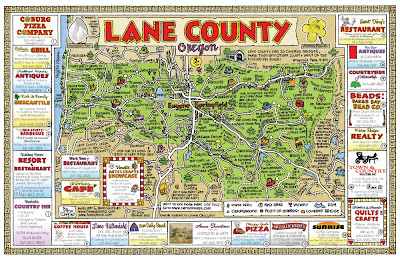 Thanks to reader Raeven at Silent Country for alerting me to this story.

The implications of this story are rather frightening. Here is the the Eugene Register Guard with the details:

Because of staff cuts, come May 20 there will be no medical death investigators to respond to local reports of accidental, suspicious or unexplained deaths, the deputy medical examiner, forensic pathologist Dr. Dan Davis, wrote in the letter earlier this month.

Without such investigations and a morgue in which to perform autopsies, he will be unable to determine death causes and sign death certificates, he wrote. This will complicate far more deaths than the handful each year investigated because of crashes, homicides or suspected foul play, he and others said.

In a given year, the Lane County Medical Examiner’s Office investigates about 1,000 deaths — some merely because the person died of undetermined causes while not under a doctor’s care.

Without death certificates, burials and cremations cannot occur, and estates cannot be settled. The investigators’ absence will create an “ongoing local disaster” for area hospitals, nursing homes, paramedics, police, mortuaries and “most significantly, the citizens of Lane County,” Davis wrote.

Jobs in the medical examiner’s office are just a few of the many county government positions slated for cutting this spring in a financial crunch brought on by rising personnel costs and what is likely to be a steep reduction in so-called timber payments from the federal government. Also on the chopping block are lawyers and support staff in the district attorney’s office, sheriff’s patrols and jail staff, and animal services — although the job eliminations have not yet been carried out and officials are scrambling for alternatives.

Lane County District Attorney Alex Gardner confirmed this week that he has notified two full-time and five part-time medical death investigators that they will lose their jobs after his office stops funding their work effective May 19. Collectively, those employees provide 24/7 response to accidental, homicidal, suspicious or unexplained deaths.

The DA’s office also will stop funding the part-time morgue attendant and supplies needed for Davis to perform autopsies in a basement room of Sacred Heart Medical Center, University District.

The meaning of this story ought to be pretty clear--the American criminal justice system is on the verge of beginning to break down due to decreasing resources. Prepare accordingly.