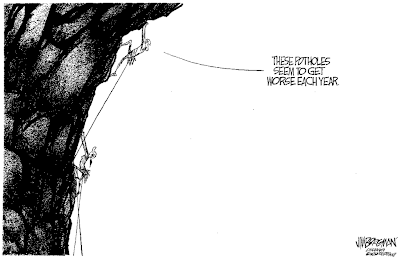 It must be great to be a liberal think tanker-type...to be able to sit around in your ivory tower coming up with new ways to explain how America can be fixed that have no basis whatsoever in reality. The best part is, because your ideas are only ever considered by other liberals and progressives, there is never anyone around who will be willing to tell you that you're actually full of shit. This is where I, as a former member of the tribe come in.

At first glance this article, entitled "Pothole Nation," by Sam Pizzigati of the Institute for Policy Studies seems reasonable in that it decrys how America has for the past generation or two been allowing its infrastructure to slowly decay:


Investing in infrastructure used to be a political no-brainer. Politicians of nearly every ideological stripe supported government spending on everything from school buildings to bridges.

This consensus remains solid — among the American people. Only 6 percent of Americans, one poll last year found, consider infrastructure "not that important" or "not important at all." Among our politicians, it's a different story. Infrastructure has become a political hot potato. Congress can barely reach any consensus at all. Lawmakers have spent more than two years haggling over a bare-bones transportation bill.

Overall, U.S. infrastructure spending has declined dramatically. Back in 1968, federal outlays for basic infrastructure amounted to 3.3 percent of the nation's gross domestic product. Last year, federal infrastructure investments made up only 1.3 percent of GDP. The American Society of Civil Engineers estimates that we would now need to spend $2.2 trillion over five years to adequately "maintain and upgrade" America's roads, dams, drinking water, school buildings, and the like.


But lawmakers in Congress are moving in the opposite direction. The House's 2013 budget, if adopted by the Senate, would force massive cutbacks in infrastructure investment.

The impact of these cutbacks? Still more potholes, brownouts, and overcrowded classrooms and buses.

The irony in all this: We ought to be witnessing right now a historic surge in infrastructure investment. The cost of borrowing for infrastructure projects, the Economic Policy Institute's Ethan Pollack points out, has hit record lows — and the private construction companies that do infrastructure work remain desperate for contracts. They're charging less.

"We're getting much more bang for our buck than we usually do," says Pollack.

Yet our political system seems totally incapable of responding to the enormous opportunity we have before us. Center for American Progress analysts David Madland and Nick Bunker blame this political dysfunction on inequality.

The more wealth concentrates, their research shows, the feebler a society's investments in infrastructure become. Our nation's long-term decline in federal infrastructure investment — from 3.3 percent of GDP in 1968 to 1.3 percent in 2011 — turns out to mirror almost exactly the long-term shift in income from America's middle class to the richest Americans. And the U.S. states where the rich have gained the most at the expense of the middle class turn out to be the states that invest the least in infrastructure.

Why should this be the case? Madland and Bunker cite several dynamics at play. In more equal societies, middle classes will be more politically powerful. That matters because the middle class has a vested interest in healthy levels of infrastructure investment. Middle class families depend on good roads, public schools, and mass transit much more than rich families. Rich kids may attend private schools, and the ultra-wealthy can even commute by helicopter to avoid traffic congestion.

Some wealthy people, Madland and Bunker acknowledge, do see the connection between infrastructure and healthy economic development. But increased investment in infrastructure demands higher taxes, and lower tax rates have always been among the "more cherished priorities of the rich."

"When push comes to shove, infrastructure is likely to take a backseat to keeping taxes low," they posit. "There is a significant body of evidence that suggests a strong middle class is important for public investments."

Unequal societies — like the contemporary United States — have weak middle classes. That leaves Americans with a basic choice. We can press for greater equality. Or spend more time dodging potholes.

Notice the most basic element that is missing here? There is absolutely no mention that America is in a deep financial hole and that it is going to take a lot more than just raising taxes on the wealthy to not only get us out of our financial fix but to be able to afford a robust infrastructure repair program.

Instead we get a bunch of blather about the supposed connection between unequal societies and the lack of infrastructure spending. I'm not sure what country Mr. Pizzigati has been living in these past 40 years, but as a child and into my early adult years, I seem to remember America actually having a fairly robust middle class. Certainly, they were large enough in number that they could have voted to support infrastructure projects. But that's not what they did, is it? Nope, instead they voted for the assholes, starting with Ronald Reagan, who promised to cut their taxes. The rich might as a class like lower taxes, but they hardly have enough votes to win elections unless they pull a substantial portion of the middle class (and working class) along with them.

So why did Americans so docilely agree to give away the store? Because even though they may want their government services, they don't want to pay for them and hate paying taxes even more. That is the very essence of Spoiled Rotten Nation. Me first and fuck the rest of you...until one day the whole stinking system collapses under the strain, as our deteriorating infrastructure will no doubt eventually do.

Bonus: I don't believe I have yet used a Cars song...time to correct that deficiency