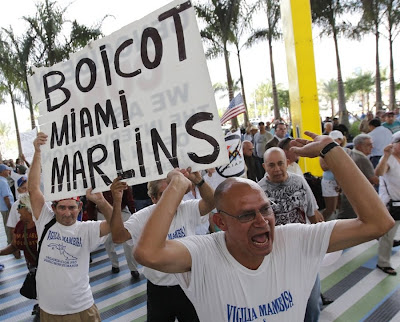 I’ll admit that I have a soft spot for controversial Miami Marlins manager Ozzie Guillen. I grew up a fan of the hapless Chicago White Sox, and for my first four decades of life on this planet despaired that I would ever get to see my team appear in a World Series, let alone win it. Then in 2005 Ozzie was the manager who achieved what so many previous White Sox managers, including the legendary Tony LaRussa, failed to do: he led the Pale Hose to a baseball world championship.

Moreover, Guillen is not one of those purposely colorless athletic figures who give bland, unenlightening statements to the press in every interview hoping never to offend anybody. He is instead refreshingly brash and unafraid to speak his mind, even if he can at times be combative and quite often doesn’t make a whole lot of sense. As a fan, part of the attraction of having Ozzie manage your team is that you are never really quite sure what he is going to say or do next.

Unfortunately for Ozzie, he switched locales this past offseason from the chilly shores of Lake Michigan to the balmy climes of South Florida. And whereas jaded Chicagoans were much more inclined to just write off his more outrageous pronouncements as “Ozzie being Ozzie” especially as long as he kept winning, clearly Miamians, especially those of Cuban descent, have much less of a sense of humor.

So it was that Ozzie found himself in considerable hot water this past week for these remarks he made in an interview with Time magazine:


“I love Fidel Castro… I respect Fidel Castro, you know why? A lot of people have wanted to kill Fidel Castro for the last 60 years, but that motherf****r is still here.”

The funny thing about this whole stupid media manufactured controversy is that what Guillen said is really not all that different from another comment he made back in 2008 in an interview with Men’s Journal:


"Fidel Castro," he said. "He's a bull---- dictator and everybody's against him, and he still survives, has power. Still has a country behind him. Everywhere he goes they roll out the red carpet. I don't admire his philosophy. I admire him."

Clearly, these are not so much political statements as expressions of admiration for a man who has been a survivor on the world scene for decades despite having many powerful enemies. And really, how can you NOT admire Castro at least for that? Was Castro a dictator who came to power through violent means? Absolutely. But he was not much different in that regard than the man he replaced, Fulgencio Batista y Zaldívar. What’s more, by 20th century standards Castro was hardly the most brutal dictator out there, and in fact he was no worse than many other dictators that the United States has actually supported during that time.

So now, Guillen has been suspended by his team for five games and forced to apologize just for expressing a candid opinion while right-wingers cackle with glee. The same right-wingers, I might add, who would no doubt be outraged had Guillen been suspended for making some intemperate remarks about Obama—because it is only kosher for those assholes to complain against “political correctness” when it is being wielded as a weapon in their direction.

I initially tried to avoid writing about this story because it depresses me immensely, but it just kept mushrooming until I felt compelled to say something about it. First off, Ozzie Guillen is a baseball manager. He has absolutely no influence over American foreign policy, and his opinions count in the grand scheme of things for exactly the same amount as mine do…in other words they don’t count for jack shit. The idiots who were out there protesting his remarks need to get a fucking grip already. Or better yet, if they are so damned concerned about what is going on Cuba maybe they ought to just pick up and go back there.

Secondly, regarding the craven ownership of the Miami Marlins, it would be one thing to put out an official statement affirming that the opinions expressed were the personal opinions of Ozzie Guillen and not the Miami Marlins baseball club. But by suspending Guillen they have set a very bad precedent in which any fringe group with a chip on its shoulder will demand a suspension for anyone in their organization who says something they perceive as offensive. Considering that the team employs a large group of rich young male athletes—a demographic not exactly known for its sensitivity, particularly towards women—they really should have thought this action through a little better.

But lastly and most importantly, this incident has once again aimed the direct spotlight at America’s absolutely asinine foreign policy towards Cuba. The last time that tiny island nation posed any legitimate threat to the United States was when President Kennedy stared down Nikita Khrushchev and forced him to withdraw the Soviet nuclear missiles that were being installed there. Since the end of the Cold War and the loss of its Soviet patron, Cuba has essentially lost the ability to project its power or even much influence beyond its own borders.

The country today, where the aged and infirm Castro is no longer even the president any more, has little significance on the world stage. And as for the regime still being technically “communist,” like in China and Vietnam that term no longer has much if any remaining relevance. Cuba is certainly not a democratic society, but given just how tightly the billionaire oligarchs control American politics and how most U.S. government policies involving support for big business, war and empire change little if at all no matter which party is in power, one could reasonably make the same exact argument about this country.

It is long past time or America to get over its petulance about its failure to dislodge Castro after he thumbed his nose at us after the revolution. His side won and the side of the Cuban exiles in Miami lost. In that they are no different than the losers of any war throughout world history, and in fact are living much better lives than do most unfortunates who have ever found themselves in that situation. They can continue to whine and moan about the downfall of the corrupt, gangster-ridden regime Castro replaced, but the rest of the world has rightly moved on. As for Ozzie Guillen, if because of this stupid flap he stops running his yap he'll become just another supremely uninteresting sports personality.


Bonus: A sweet little tune from the criminally underrated Florida indie rock band, The Silos, off of their classic 1987 album, "Cuba"