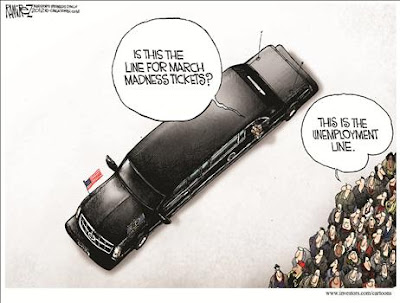 Given that it was supposed to combat the worst effects of the Great Recession, one might have assumed that there would have been a provision in President Obama's $700 billion boondoggle Recovery Act to increase the amount spent on job retraining programs for the unemployed. Shockingly, or perhaps not-so-shockingly given what a colossal waste of taxpayer funds the Recovery Act really was, that was actually not the case. Here is Bloomberg Businessweek with the story:


Federal funds to retrain Americans who’ve lost their jobs are drying up. Many job seekers who show up at career centers to request courses in such growing fields as computers or nursing are being turned away because money for that training has already been spent, the New York Times notes.

The U.S. spends nearly a billion dollars less on retraining the unemployed than it did in 2000, when the unemployment rate was 4 percent. Last year the government spent about $1.2 billion, compared with $2.1 billion in 2000.

Whether there will be a new influx of cash depends on congressional budget wrangling. In his latest budget, President Barack Obama proposed an additional $2.8 billion for job training. The National League of Cities says the recent budget proposed by House Budget Committee Chairman Paul Ryan (R-Wis.) would severely reduce that funding. Ryan says he’s only streamlining and improving programs that “overlap, lack clarity and accountability, and fail to meet the challenges workers face.”

If there is anything worse than a blow dried little asshole Randian politician, it's a blowdried little asshole Randian politician who is too afraid to even be honest and say that he favors such budget cutting because he is a devotee of a crazy old hag who went on the dole herself in the years just before she mercifully relieved us of her malevolent presence. Instead he has to make up a bunch of mealy-mouthed crap to try and justify his Social Darwinism.

There is a much better reason than just being a selfish asshole to oppose President Hopey-Changey's desire to just throw more money at the problem, and the article actually goes on to make it:


Although the separate budget proposals reflect ideological differences, it’s also very difficult to figure out how much it’s worth spending on programs with a value that’s hard to prove. Even the most effective retraining programs face a huge problem: You can’t retrain people for jobs that don’t exist. And right now, the number of people seeking employment is greater than the number of available jobs. That isn’t likely to change soon, either: As the Wall Street Journal reported today, most of the new hires by S&P 500 companies since the recession have been outside the U.S.

Bingo...give that business reporter a cigar for not buying into the the "jobs recovery" hype. My colleague Dave Cohen over at Decline of the Empire actually did a post this past Monday about the lack of good paying jobs being created during this "recovery." The key factoid from that post is that more than 55 percent of new jobs added in the past six months have been in the retail, temp, "health care and social assistance" and "leisure and hospitality" sectors. In other words, menial jobs that do not require a great deal of training. In such an economy, Obama could increase the budget for job retraining tenfold and it would likely make very little difference. Not only that, federally subsidized retraining places those who complete it into direct competition for jobs with young adults just entering the workforce and who received no such federal help.

But ultimately, this is the biggest argument against federally subsidized retraining:


To Safeway, the retrained applicants are better candidates. In essence, the government is paying for training that Safeway would otherwise have to provide.

Many of the most “successful” retraining programs work in just this fashion, as a January report from the Government Accountability Office points out. A local employer works closely with the career center to tailor the retraining exactly to their needs. In return, the employer all but promises to hire the workers. That helps officials make their numbers look good, too. The only question is where the money will come from to pay for it.

That's right...the federal subsidies ultimately serve to fatten the bottom line of the corporations. They are, in fact, just another form of corporate welfare, and one we can ill afford at a time of trillion dollar plus federal budget deficits. If the companies need new employees, let their CEOS receive a few million dollars less to blow on solid gold backscratchers.


Bonus: Because with Obama, hope is like the rain