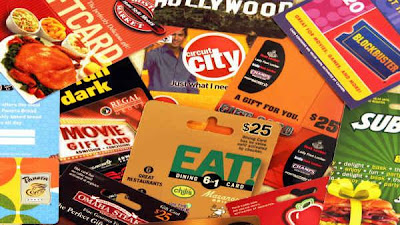 First off, it must be pointed out just what a ridiculously bad deal gift cards are. By paying, say, $5 extra to purchase a $100 card, the buyer is basically handing free money right over to whatever company issued the card. So they were already not the smartest purchase a person could make, and if the State of New Jersey persists in its latest nefarious tax collection scheme, it's about to get a whole lot worse. Here is Huffington Post Money with the details:


Like many states on the hunt to fill in budget shortfalls, New Jersey is getting creative. The state is making a grab for its residents' gift cards.

If you live in New Jersey and wait more than two years to cash in on that Red Lobster gift card that your boss gave you, you'll be out of luck. Under a new state law, New Jersey will take control of funds on gift cards that have not been used for two years. The law could potentially translate into millions of dollars for the Garden State, which would hold the gift card money as "unclaimed funds." That means New Jersey will keep that money in state coffers rather than a consumer being able to access it through the card.

But gift card makers, unwilling to part with so much money in unredeemed funds, are fighting back, pulling out their wares from the state altogether. On Thursday, Blackhawk Network and InComm, the companies behind hundreds of major name-brand gift cards sold through thousands of vendors, said they are pulling their cards from New Jersey vendors starting on June 30 if not sooner. Earlier this week, American Express pulled its cards from New Jersey retailers.

The new law would make card sellers responsible for gathering from buyers certain personal information, such as a ZIP code. That information would then be used by New Jersey to collect the unused money on the cards into the state's unclaimed money fund 24 months after the last time these cards were used.

There are a couple of issues to consider here. First there is the invasion of privacy aspect of collecting customers' personal information. But that seems to be pretty much par for the course in America these days. Corporations and the government continually push the limits in that area, and as long as the vast majority of the public remains completely asleep at the switch about it, nothing is going to even put the brakes on that particular trend.

But more importantly, exactly what justification is there for this method of tax collection? It is so completely arbitrary as to have the appearance of out-and-out theft. Don't get me wrong, I am not an anti-tax reactionary. Government needs money to operate, and taxes are the price people pay for living in any society. But those taxes should be fairly and equitably assessed and there should at least be some articulable justification for them. This asshole move fails on both counts.

Heaven forbid that the Garden State might consider a more just and equitable tax to try and make up its budget shortfall, like maybe one on all of those financial sector scumbags who live in the state. Taxing a fucking asshole banker just for BEING a fucking asshole banker is every bit as arbitrary as confiscating people's gift card balances. And you know that one of the reasons this odious law passed is that millionaire bankers don't buy $100 Best Buy gift cards.

But wait, the state might argue, this action isn't REALLY theft because we have provided a fail safe:


Procrastinating residents could still obtain any remaining balances on the gift cards by contacting the state's unclaimed funds office.

Oh yes, that is just what I would want to do if my gift card balance got confiscated, wrestle with the state government's Orwellian bureaucracy trying to get my $100 back. How much do you want to bet that the office that would field calls about such inquiries will have the biggest nightmare of an automated telephone answering system ever installed in any government office? If you are ready to abandon all hope, please press 7.

But who is ultimately responsible for this abomination? Why, you are of course. And by "you," I mean the average dumbass American consumer:


Under federal law, gift cards must be usable for at least five years after purchase, though most do not have any expiration date. Consumer advocates have criticized gift cards because consumers often forget about them or leave balances unused.

Redemption rates are low for cards and as much as $41 billion in the United States went unspent on all gift cards from 2005 to 2011. In some cases, activation or dormancy fees can eat up small amounts of money left on cards. All these things have made them lucrative for card makers.

It kind of makes you wonder why stores even bother charging the $5 purchase fee in the first place, doesn't it? You would think that sales of the cards, and hence profitable unredeemed balances, would be even higher if they just gave them out for free.

What can you say about a society which is so wealthy yet addle-minded that its citizens can afford to piss $41 billion down the sewer for nothing? There are whole countries out there that don't have a GDP that large. To put that number in perspective, it equals over $100 for every man, woman and child in America. That means the average family of four has put over $400 onto unused gift cards and have just forgotten about them. No wonder so few people get upset and protest moves like one. It's not like they even noticed just how blatantly they were getting ripped off in the first place.