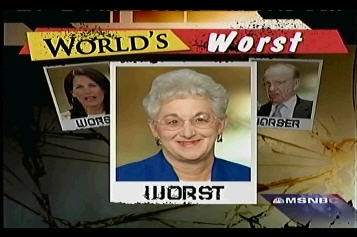 Awhile back, I adopted the phrase "assholocracy" for use as a tag here at TDS, and since then I have already used it on an incredible 52 different posts. Back in the 1970s glory days of Larry Flynt and Hustler Magazine, he used to have a regular feature called "Asshole of the Month" (and yes, I only read that particular publication for the articles....really). Not having picked up an issue in more than 20 years, I don't know if Flynt is still running that always amusing feature, but if he is I would humbly suggest that for April 2012, he consider making it cretinous North Carolina Representative Virginia Foxx. Here is the Raw Story with the details:


If someone is looking for sympathy for their high student loans, Rep. Virginia Foxx (R-NC) would not be among those providing any support.

According to audio obtained by Think Progress, the congresswoman appeared on G. Gordon Libby show Friday afternoon, saying she “never borrowed a dime of money” during her time in college before lashing out at those burdened with heavy loans.

“I have very little tolerance for people who tell me that they graduate with $200,000 of debt or even $80,000 of debt because there’s no reason for that,” Foxx said. “We live in an opportunity society and people are forgetting that.”

Despite her disgust for high student loans, Foxx is somehow content with high mortgage notes. Think Progress reported that Foxx owed two individual notes up to $250,000.

Here are a few fun facts that Representative Foxx might want to consider before ever again opening her big fat fucking yap about student loans. According to her Wikipedia page, old battle axe Foxx was born in 1943, which means she would have graduated college around 1965 or so. According to the National Center for Education Statistics, the average cost for one year of undergraduate tuition, room and board at a public university in 1965 was: $950. By 2007 (the last year for which statistics were available from the NCES), tuition, room and board had risen to a whopping $11,034. At private schools, tuition had risen from $1,907 to $28,384. What's even worse is that since 2007 many public universities have have imposed large tuition hikes on students as cash-strapped state governments have cut back funding.

So it doesn't take a whole lot of fucking imagination to understand how graduates are being burdened with such impossibly huge student loan debts and at a time when there are few good paying jobs with decent benefits waiting for them when they graduate. Unless you are addle-brained asshole North Carolina Representative Virginia Foxx that is.

Addendum: But wait, it gets worse. Right after I wrote this post, I came across another article in Salon about Virginia Foxx, who is not only an asshole, but a fucking hypocrite as well:

Like so many of the bills passed by the House since Republicans gained the majority in the 2010 midterm elections, the bill was designed to repeal specific actions taken by the Obama administration. In this case, the issue at hand was the Obama administration’s efforts to ensure greater “program integrity” in the for-profit educational sector. Specifically, a new federal definition of what constitutes a legitimate academic “credit hour” and a new requirement that all online providers of post-secondary education be accredited in each and every state in which they do business.

Foxx’s bill repealed both measures. (The Senate has yet to address the measure.) According to Foxx, the new federal regulations threatened “innovation” in the educational sector. As reported by InsideHigherEducation, Foxx is on record as declaring that for-profit colleges do a “a better job of being mindful about efficiency and effectiveness than their nonprofit peers.” By, for example, flexibly providing online education when and where low-income working Americans want it, the for-profit free market delivers the kind of quality higher education that Americans so desperately need. The government should just stay out of their business.

I stumbled upon this story while researching the student loan crisis and at first I was perplexed. I didn’t understand why Republicans were opposed to higher academic standards for the for-profit sector, and I didn’t get the connection to student loans. But it didn’t take much research to discover what was really going on: an example of blatant hypocrisy sufficient to outrage even the most jaded observer of American politics.

The for-profit educational sector is an industry almost entirely subsidized by the federal government. Around 70-80 percent of for-profit revenues are generated by federal student loans. At the same time, judging by sky-high dropout rates, the for-profit schools do a terrible job of educating students. The Obama administration’s efforts to define a credit hour and require state accreditation were motivated by a very understandable desire: to ensure that taxpayers are getting their money’s worth when federal cash pays for a student’s education. In contrast, Foxx’s legislation is designed to remove that taxpayer protection. So here’s a more accurate title for her bill: “The Protecting the Freedom of For-Profit Schools to Suck off the Government Teat Without Any Accountability Whatsoever Act.”

The for-profit educational sector has been growing extraordinarily rapidly for the past decade: 12 percent of all post-secondary students are now enrolled in for-profit schools, up from 3 percent 10 years ago. But the main beneficiaries of the growth appear to be the shareholders and executives of the largest publicly traded for-profit schools, not the students.

In 2008, for-profit schools registered a a graduation rate of 22 percent. (Public and private non-profits registered 55 percent and 65 percent respectively.)

The biggest player in the for-profit sector, the University of Phoenix, graduated only 9 percent of its B.A. candidates within six years.

The pathetic performance of the for-profit sector in delivering actual degrees becomes all the more alarming when you realize that most of the students who are dropping out paid for their educations with student loans that have to be paid back: According to a report released in the summer of 2010 by Sen. Tom Harkin, D-Iowa, “Emerging Risk?: An Overview of Growth, Spending, Student Debt and Unanswered Questions in For-Profit Higher Education,” in 2009, the five largest for-profit schools reported that government grants and loans accounted for 77.4 percent of their revenue.

Really, North Carolina, on this blog I have facetiously asked, what's the matter with a lot of different states, but you really have some 'splaining to do as to how you managed to elect someone as purely odious as Representative Virginia Foxx.


Bonus: "But you say that we're the assholes...because we bitched about the hassles...while you're sleeping in your castle"