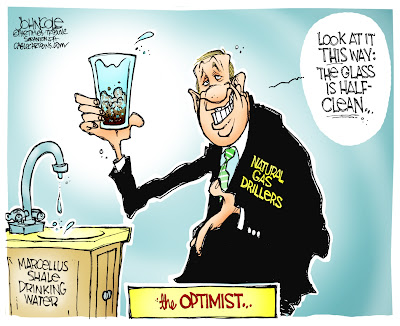 It's bad enough that rampant natural gas fracking is being allowed in the U.S. despite the negative environmental impacts of the process as well as the risk of earthquakes. Because natural gas is difficult to export, however, one could at least argue that fracking is helping to reduce America's dependence on foreign energy sources. But now all of that is about to change thanks to the fact that the U.S. government has become a wholly owned subsidiary of the corporations. Here is CNN Money with the details:


The government approved the first ever natural gas export facility in the lower 48 states on Monday, clearing the way for a project that could be a significant job creator.

But critics argue that, just like the Keystone pipeline expansion, building this project will have environmental impacts far beyond the plant itself. They also say it could raise the price of natural gas in the U.S.

The Federal Energy Regulatory Commission voted in favor of Texas-based Cheniere Energy's plan to build a giant natural gas liquefaction and export terminal at Sabine Pass, which straddles the Texas-Louisiana boarder just north of the Gulf of Mexico.

Well, so much for the argument that fracking is helping to make America more energy secure. Surprise, surprise, that argument is and always was complete bullshit. Instead, it's all about the Benjamins:


Cheniere says the plant itself and the natural gas extraction needed to fuel it will support between 30,000 and 50,000 jobs a year.

The United Sates is currently experiencing a boom in natural gas production, largely thanks to the controversial process of hydrologic fracturing, or fracking for short.

All the big oil companies, including BP, Exxon Mobil, and Royal Dutch Shell, are now participating in the boom.

But the surge in production -- without any way to export it -- has caused a collapse in natural gas prices in the U.S. The gas industry sees exports as crucial to keep the boom going, along with the thousands of jobs the boom has created.

Natural gas can command five times the U.S. price in Asia or Europe. It can be used as a home heating fuel, burned to make electricity, or used in chemical or fertilizer production.

Notice how they lamely try to justify this action by claiming it will create jobs. Not withstanding the fact that, just like with the Keystone Pipeline, the job creation estimates are no doubt greatly overinflated, there is this little problem:


Cheniere's application was the first the government approved. Applications for seven other facilities around the country are pending. If all are approved, the nation could end up exporting one-fifth of its current gas output.

That's something critics are working to stop.

Fracking involves injecting sand, water and chemicals deep into the ground to crack the rock and allow the gas to flow more freely. Some fear it is contaminating the ground water and leading to earthquakes.

Critics also say it could lead to an increase in natural gas prices in the U.S.
That could harm not only consumers who may pay more for heat, but also manufacturers that could pay more for electricity and materials.

That "could potentially have catastrophic impacts on U.S. manufacturing," said a report on the matter from House Democrats on the Natural Resources Committee.

Which would no doubt destroy far more jobs than will be created in the fracking industry. So all of the risks that the American public is being asked to run by allowing fracking to continue are not even being borne to benefit them, and what's more, their own elected government is the one selling them down the river. Too bad so many of them are hooked on American Idol, Dancing with the Stars and the NFL and will never notice until the day a fracking-generated earthquake drops the roof right down on their fucking thick skulls.


Bonus: Now you know what it is like to live in an exploited colony