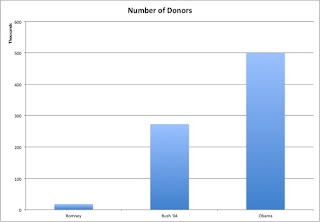 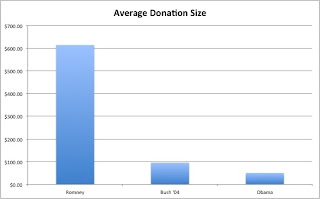 I have stated repeatedly on this blog that anyone who is not a millionaire or a billionaire who donates money to one of the presidential candidates is seriously delusional at best.  As I pointed out in last Friday's rant, each campaign is expected to raise over (cue Dr. Evil) one BEEEELION dollars, most of it from the fat cat donors who completely own the election process and the two major candidates being put up to give the laughable illusion of "choice."  So far, as you can see by the two charts above that were posted Friday on Buzzfeed, non-wealthy potential Romney voters appear to be more realistic about the fact that he does not support their interests than non-wealthy Obama voters.

There was not an article to go with these charts, just a comment from the blogger who posted them:


March fundraising report shows Romney even more dependent on wealthy donors than Barack Obama and George W. Bush in 2004. Can he fire up the base?

Actually, considering that his "base" is Wall Street and the faction of the corporate elite who support the Republican Party, he already has.  Those tiny donations from the delusional little people do not actually even amount to a rounding error in the fundraising for either campaign. Don't get me wrong...I'm not saying that supporting one of the major party candidates is preferable to supporting the other one, just that early on rank-and-file Romney supporters seem to be suffering from fewer delusions about their guy--or maybe they just hate him for being the Mormon former gubbner of Taxachusetts.


Bonus: A commenter on Friday suggested that I could have used this song then...so here it is