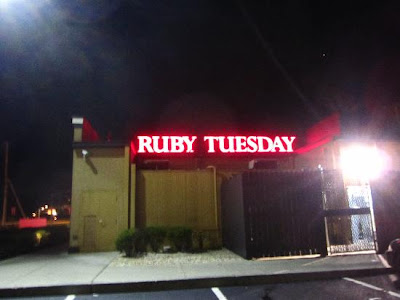 All right, I just have to get this off my chest. I actually ate at a Ruby Tuesdays once and the food sucked balls. Utterly tasteless, in fact. I don't understand why people are willing to blow their hard earned money going to chain restaurants that serve such crappy fare, but then again I long ago recognized that my finger is not exactly on the pulse of America.

Still, that isn't the fault of the employees, and it will be they who suffer from this decision. Here is MarketWatch with the details:


Ruby Tuesday announced plans to close 25 to 27 restaurants that it said have failed to perform up to expectations. The closings will come before the end of May, the Maryville, Tenn.-based company said late Wednesday in reporting financial results for the third quarter ended Feb. 28. Profit fell for the latest quarter as revenue rose 1.8% to $324.8 million, but same-store sales dropped 5% at company-owned Ruby Tuesday restaurants, and for the year, management projected a decrease of 4% to 4.5%. Full-year earnings are forecast at 43 cents to 48 cents a share, excluding the impact of impairment and exit costs related the restaurant closings as well as other factors. The company also announced it will acquire Lime Fresh Mexican Grill for $24 million, a deal expected to be completed during the current quarter.

Just like with Walmart, it is those retail concerns that appeal prominently to finacially strapped working class families, those being hardest hit by job losses and high gasoline prices, that are suffering the most right now.


Bonus: But of course, what else COULD it be?