The East Coast Is Burning 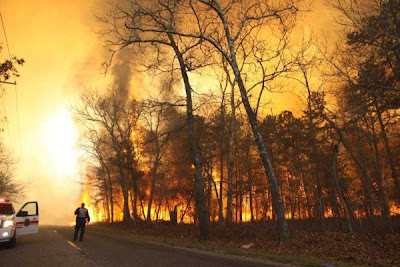 The downside of the recent wave of unprecedented warm weather in U.S. is now making itself felt in the form of widespread outbreak of wildfires. Here is CBS News with the details:


Along the Eastern Seaboard, firefighters are battling a string of wildfires after weeks of unusually warm and dry weather. Fires are burning in nine states - from New Hampshire to Florida - where it is, ironically, "Wildfire Awareness Week."

Wildfires broke out up and down the East Coast Monday, fueled by whipping winds and dry conditions.

On New York's Long Island, hundreds of firefighters raced to keep flames from closing in on Brookhaven National Lab, a nuclear physics facility. The blaze swallowed up 1,000 acres, destroyed at least two homes and sent three firefighters to the hospital.

Steve Bellone, a Suffolk County executive, told CBS News, "This fire is as serious as it gets. It is not yet under control."

Neal Coleman's son shot video of the fire as it crept dangerously close to their home. "I'm telling you the fire was over 100 foot tall," Coleman said. "It was unbelievable. You see it in the movies and on TV, but until you're there, you're like, 'Wow, I think I'm in trouble.'"

Officials say the fire is 50 percent contained, but they warn homes there are still in jeopardy. Firefighters say they have no idea when they will have the fire there under control.

In New Jersey, another inferno - which officials are calling suspicious - is on track to burn through 1,000 acres. On Monday, it came within just a few feet of some homes.

Resident Nick Sama said, "It was very horrifying. It was too close for comfort. It was literally behind our home."

The dry, windy weather also helped feed flames in Pennsylvania and Connecticut where a brush fire lined a railroad track. Nearby homes and businesses were evacuated.

But it wasn't just the Northeast on alert. The National Weather Service issued fire warnings throughout the Mid-Atlantic region along with parts of the Midwest and South.

In Virginia, helicopters dumped water from high above to try to douse flames.

The wildfire outbreak stretched all the way down to Miami where a fast-moving fire caught residents by surprise.

One resident there said, ""Actually that's the biggest fire I've ever seen in my life."

Government forecasters say 2012 has started out warmer than any year on record. Last month was 8.6 degrees warmer than normal, and there were more than 15,000 record high temperatures in March. Every state had at least one.

Here in Virginia where I live, we have had very little rainfall since the unusually warm weather began a month ago, and that was after a virtually snow free winter. I recall that back in 2008 we suffered through a severe drought that lasted all summer and into the early autumn. Given how dry it is already, if that happens again it could be a very interesting summer in these parts.


Bonus: Sorry, Jimi, but you may not want to stand next to these fires