The Rose Bowl Parade is Starting to Wilt 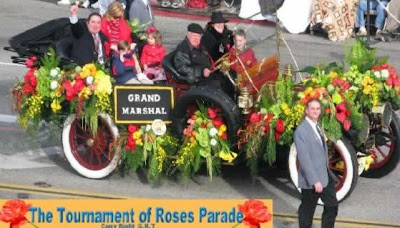 While the chicanery continues in the financial markets, propping up the stock market in an effort to convince the easily misled that all is well with the economy, stories continue to appear demonstrating that on Main Street the economic crash remains ongoing. The latest casualty, as reported by the New York Times on Monday, is the Rose Bowl Parade:


...the sputtering economy and municipal budget cuts are presenting new problems for the Tournament of Roses.

Several cities have had to abandon plans to put up floats for the parade, after doing so for decades. One company that had built floats for 25 years announced that it was going out of business, after its most reliable customers dropped out of the parade. And Occupy protesters threaten to show up 40,000 strong along the parade route to blanket the area with their message that “not everything is coming up roses.”

As if anyone needed reminding.

Nearly every city in Southern California — and in hard-pressed regions across the country — is struggling with deep budget cuts, trimming back park services and reducing the city staff. In the last few years, five cities have dropped out of the parade and several more considered doing so, only to be rescued by private money. Other cities have drastically scaled back their floats to save money. And few of those who left expect to re-enter the parade anytime soon.

The City of Long Beach, which faced a $43 million gap in its $400 million budget, had put a float in the parade every year for nearly nine decades. But with cutbacks all over the city, including in its tourism department, the decision to drop out was hardly difficult, Mayor Bob Foster said.

“It just doesn’t rank high on a priority list during times like this,” Mr. Foster said. “I don’t relish the decision, but I don’t think people are going to argue that we should keep a float when we are cutting libraries.”

I must say that is a rare bit of common sense being shown there by City of Long Beach Mayor Bob Foster. No sir, it certainly does not make sense to spend money on such a frivolity at the expense of vital city services. Note the key factoid Mayor Foster's quote: the city has had a Rose Bowl float for NINE DECADES, meaning that even during the depths of the Great Depression it was able to afford to do what it now can no longer afford to do. That seems pretty significant to me.


Even some of the most longstanding companies that sponsored floats have bowed out. For the first time in anyone’s memory, there will be no team of Clydesdales representing Budweiser and St. Louis. The company, now a subsidiary of a multinational corporation, decided to drop out of the parade to focus on sponsorships that “reach a higher concentration of beer drinkers” and “more directly discuss the Budweiser brand.”

Love that bit of weaselly corporate FlackSpeak Budweiser is using to try to excuse the fact that their pisswater beer won't be represented in the parade this year. As a serious beer drinker myself, I'll save you assholes the trouble and "discuss the Budweiser brand" for you--it's shit. Frankly, I wouldn't even pour it into the troughs used to water the Clydesdales because that would constitute an act of animal cruelty.

Moving on, it's also nice to see that the Occupy Movement is getting involved in protesting the Rose Parade:


Occupy protesters say they plan to bring 40,000 people to the parade and form their own “human float” at the end of the route.

“We’re in a crisis situation, and we can’t pretend that everything is as hunky-dory as people in power want us to believe, when there are tens of thousands of people unemployed here,” said Peter Thottam, the lead organizer for the Rose Parade protest. “The parade has been a cultural embodiment of corporatization and militarization of our society. There are thousands of people there, and millions of people watching it on television, and we want to bring our message to them.”

Damn straight, Mr. Thottam. Although I must say that it appears as that within a few years it will be the peak oil-induced economic crash rather than your protests that spell the overdue end of this whole silly spectacle.
Posted by Bill Hicks at 6:51 AM