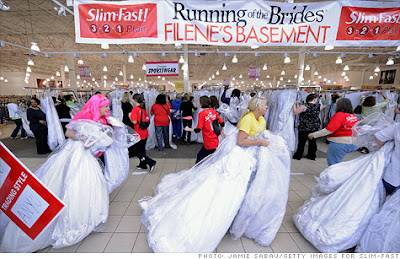 Another day, another retail chain goes belly up and another 2,500 people lose their jobs:

The discount department store chain, which operates 25 Syms and 21 Filene's Basement stores, couldn't cut it amid a sour economic climate and rising competition from larger rivals. Syms filed for Chapter 11 bankruptcy protection Wednesday and said it would shut down all of its stores by the end of January 2012.One casualty of this action is a long-standing Boston tradition:
Filene's Basement was originally part of the now-defunct Filene's department store, which opened its doors in Boston for the first time in 1909. The company is famous for its annual "Running of the Brides" in Boston, which just took place -- for the last time -- on Friday.

Filene's Basement had offered severely discounted wedding dresses, and brides-to-be would camp out early to be among the first to get the best deals.

The companies have nearly 2,500 employees combined.

One would think that in this economy, deeply discounted wedding dresses would be a hot ticket item. But maybe young brides-to-be can't afford to have a wedding ceremony at all anymore.


Bonus: The bride is rocking and rolling no longer.