Dippin' Dots Soon to be the "Ice Cream of the Past" 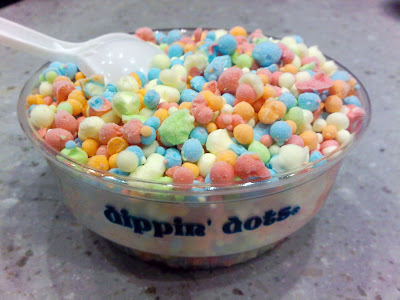 I really have never understood the appeal of Dippin' Dots. They sell this crap at most ballparks for a huge price mark up. I swear, some people will eat anything if it is colorful and sweet and there is some form of entertainment placed in front of it. Anyway, it looks like Dippin' Dots is now in deep trouble:


Once the self-proclaimed "Ice Cream of the Future," Dippin' Dots is seeking federal bankruptcy protection, a move the company said is aimed at staving off foreclosure on more than $11 million in loans.

The Paducah, Ky.-based company filed for Chapter 11 reorganization Thursday night, asking U.S. Bankruptcy Judge Thomas H. Fulton to allow it to use cash collateral to continue operations while the case plays out. The company said in a filing that allowing it to use the cash collateral and stay functioning will not harm creditors, including its largest single creditor, Regions Bank, which is owed $11.1 million.

Steve Heisner, director of administration for Dippin' Dots, said Regions gave the company 48-hours' notice that it intended to foreclose on the loans. That move forced Dippin' Dots Inc., to file for bankruptcy while looking to refinance the debt, Heisner said.

"We are hopeful and believe we will be successful," Heisner told The Associated Press. "There is no thought, intent ... that our operations will be significantly different than they are today."

The company "has no alternative borrowing source and to remain in business, the (company) must be permitted to use the cash proceeds described herein to pay general operating overhead and administrative expenses," its attorneys said in court documents.

Heisner said the bankruptcy affects only the manufacturing and national sales arm of the company. The franchise end of the company will not be affected by the proceedings, he said.

"The dot, it's going to be there," Heisner said. "There's no doubt about it."

Yeah, but for how much longer? Because it strikes me that any cash strapped family looking to cut back on expenses could easily do away with the dot. And maybe lose a few pounds along the way as well.
Posted by Bill Hicks at 6:11 PM