Friday Rant: Yes, Virginia, Our State Will Suffer Most from Defense Spending Cuts 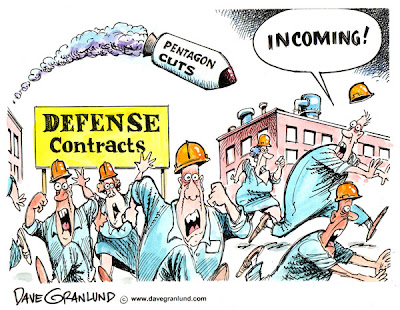 I'm a 20-year resident of the Old Dominion, but I don't expect anyone to play the world's smallest violin for my state upon reading this recent article from Bloomberg.com:


Virginia, Hawaii and Alaska may suffer the most economic harm from defense cuts of as much as $1 trillion during the next decade, a Bloomberg Government study shows.

Those three states are the most dependent on U.S. military spending, the study found. Virginia, home of the Pentagon and the Norfolk naval base, tops the list with 13.9 percent of its gross domestic product derived from defense spending. Hawaii ranks second, at 13.5 percent, and Alaska is third with 10.7 percent. All other states are in single digits, the study showed.

Bloomberg Government examined military spending by state as Congress considers budget cuts that might threaten the economies of states such as Virginia, where the Defense Department spent $56.9 billion in fiscal 2009, the last year for which comprehensive data were available. The spending came in the form of payroll, contracts and grants.

“It is a big-ticket item for Virginia,” said Richard Brown, the state’s secretary of finance. “That would be quite a blow to Virginia if there would be a major hit.”

So where is the bulk of all that cash to Commonwealth going, anyway?


The Defense Department awarded $38.7 billion in contracts in Virginia in 2009, including $5.3 billion to Northrop Grumman Corp. of Falls Church, Virginia, $1.6 billion to Booz Allen Hamilton Holding Corp. of McLean, Virginia, and $1 billion to CACI International Inc. of Arlington, Virginia.

Ah, so that explains all the damn McMansions they seem determined to build on every square foot of undeveloped land around here, or why the upscale Tysons Corner shopping mall is chocked full of the types of overpriced, useless shit people who have too damn much money to spend like to buy. Oh, well, that's the way is goes. Let's get hacking on that defense budget shall we?

Why no, we can't do that or the terrorists will win, or your children will be forced to speak Chinese, or something like that. Or so sayeth Obama's Secretary of Defense:


Defense Secretary Leon Panetta has warned of a “hollow force” if a congressional supercommittee fails to produce a 10- year plan that can pass Congress, which would trigger automatic spending cuts. Defense budget cuts might reach $1 trillion in that scenario, which the Pentagon says would hurt national security.

“It’s a ship without sailors,” Panetta said at a Nov. 10 Pentagon hearing. “It’s a brigade without bullets. It’s an air wing without enough trained pilots. It’s a paper tiger.”

Fucking-a, Leon, and it's about goddamned time America stops speeding towards bankruptcy at 200 MPH just to appease you fuckers in the Pentagon. Or perhaps you've never taken in the wisdom of the 16th President of the United States. You know the one...waged a war in which over 600,000 Americans became casualties? Got himself assassinated in the process. Yeah, that guy knew a thing or two about war making. Here's what he he had to say:


“From whence shall we expect the approach of danger? Shall some trans-Atlantic military giant step the earth and crush us at a blow? Never. All the armies of Europe and Asia...could not by force take a drink from the Ohio River or make a track on the Blue Ridge in the trial of a thousand years. No, if destruction be our lot we must ourselves be its author and finisher. As a nation of free men we will live forever or die by suicide.” - Abraham Lincoln

And guess what, Leon, that is just as true today as it was when Honest Abe said it more that a century-and-a-half ago...even more so. Yeah, some madman in Russia or China could someday decide to launch the nukes in our direction, but all they would get out of that is atomized, not a drink from the Ohio River. Instead, we ARE committing suicide, just like Lincoln warned. Only it is FINANCIAL suicide and you and your ilk are the ones holding the gun to our collective temple and squeezing the trigger.

If there are any of you out there reading this blog who still maintain event a latent bit of support for Obama, I want you to read and reread scumbag Panetta's quotes above until they sink in. Whether you meant to or not, THAT is what you voted for, not peace and love and hope for all mankind.

And don't say, "but it wasn't Obama who said it," or I swear I take you over my knee and paddle your behind. Obama appointed this fucker. Panetta is now the official spokesweasel for the military-industrial complex. He is mouthing Obama's true policy position of defense war spending at the expense of everything else. Vote for President Hopey-Changey again next year, and THIS is what you'll be voting for, only without the excuse that you had no idea what Obama was going to do once he got into office.

So don't cry for us here in Virginia. Even though my state stands to suffer the most from proposed cuts in defense spending, I still have one thing to say to soulless cretin Leon and his perverted array of push button generals entrenched in that five-sided monstrosity on the banks of the Potomac River: Bring 'em on!
Posted by Bill Hicks at 8:51 AM