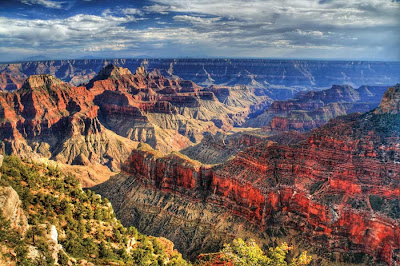 Big corporations own America lock, stock and barrel. It's not a question that is open for debate among those few who understand how things really work this country these days. Yet another small example proving this assertion was reported on Thursday:


Officials at the Grand Canyon abruptly abandoned plans to ban the sale of plastic water bottles at the Arizona national park after conversations with Coca-Cola officials, The New York Times reported Thursday.

Stephen P. Martin, who crafted the plan, told the newspaper that the effort was scrapped after Coca-Cola officials raised concerns about the plan through the National Park Foundation. He was told the effort was being tabled about two weeks before its scheduled Jan. 1 start.

Coca-Cola, which distributes water under the Dasani brand, has donated more than $13 million to the parks.

Oh, and before anybody gets all misty-eyed because Coca-Cola donates money to the park system, I will point out that $13 million doesn't even represent a rounding error when compared to the company's yearly global earnings. The original plan to ban the sale of plastic bottles was admittedly a pretty small measure to combat the enormous amount of plastic trash our society produces every year, but at least their hearts were in the right place. Or were, until their idealism collided headlong with the steamroller that is the corporate bottom line.

How did the Grand Canyon officials try to 'splain themselves after caving in? With a classic example of Corporate FlackSpeak:


David Barna, a National Park Service spokesman, said National Parks Service Director Jon Jarvis made the "decision to put it on hold until we can get more information.

"Reducing and eliminating disposable plastic bottles is one element of our green plan," Barna said. "This is a process, and we are at the beginning of it."

So, Mr. Barna, this is "just the beginning of the process" is it? What exactly do you all plan to do, first ban the sale of plastic bottles on Tuesday afternoons from 1:00 to 4:00 and see how it goes? Clearly, with that blather you seem to be auditioning to get hired on in the corporate world at some point.

Better yet, here is what the REAL Corporate Flack from Coca-Cola had to say about this controversy. Buckle your seat belts, cause it's a doozy:

"Banning anything is never the right answer," she said. "If you do that, you don't necessarily address the problem." She also characterized the bottle ban as limiting personal choice. "You're not allowing people to decide what they want to eat and drink and consume," she said.

You're absolutely right, Ms. Stribling. They are a bunch of dirty rotten, evil socialists. I have it on good authority, for example, that Grand Canyon National Park ALSO doesn't sell 100 proof whiskey, which I consider an outrage because I personally LOVE the thrill of getting massively fucked up right before hiking along the very edge of a mile deep canyon. You know what else they don't sell in the park? Condoms. Which also pisses me off because you never know when all of that amazing natural beauty is going to lead to a romantic interlude. Especially when you've got all that whiskey with you.

The person I feel sorry for in all of this is Stephen P. Martin, who apparently is a conscientious believer that our national parks should be kept as pristine as possible for the enjoyment of future generations. It's never a pretty thing to see someone's idealism get so mercilessly crushed in the relentless pursuit of the all mighty dollar. But hey, maybe he can console himself the next time he's hiking in the canyon by humming a few bars of "America the Beautiful."


Bonus: "A limited time offer, not valid in all states."