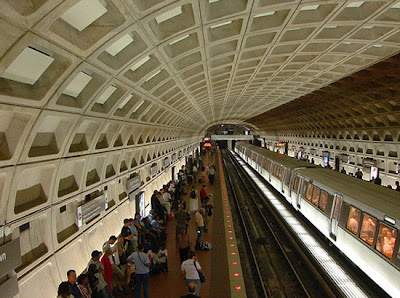 There is one important aspect of my daily life that separates me from the vast majority of Americans: I actually have a decent public transportation option that I use daily to commute to and from work. The Washington Metro subway system has many problems—overcrowded trains, frequent breakdowns, aging infrastructure and, most horribly, a fatal collision two years ago that killed nine unfortunate riders. Still, you have much better chance of dying in an auto accident than riding the subway, so I don’t worry too much about that last one.

It’s the overcrowding and the frequent breakdowns of the overloaded system that are the worst aspects of using it for commuting purposes. My office is located near the last downtown station on one of the lines headed out to the suburbs, which means that I frequently have to deal with standing room only trains packed to the limits with bodies when going home in the evenings.

After that terrible collision two years ago, Metro changed the way the trains pull into each station. The standard Metro train is six individual cars long, and before the crash they used to come to a stop centered on the platform. After the crash, for safety reasons the trains started pulling all the way to the front of each station and have been doing so ever since. Obviously, the commuters quickly caught on to this change, and so as the crowd waiting at the station for the train builds up it tends to move forward, away from the rear portion of the platform which is now not near the doors when the train stops.

But here’s the thing. In an attempt to alleviate the chronic overcrowding problem, Metro has begun to occasionally run eight car trains during rush hours. The eight car trains are long enough that when they pull into the station they take up the entire platform. Metro currently does not have enough cars in its system to run every train with eight cars during peak hours, so only about one in every five trains is configured that way.

All of this would be of little interest, but for the fact that the number of cars each train contains is flashed on an information screen above the platform along with the number of minutes until its arrival. Therefore, on nights when the station platform is crowded, which is nearly always, you would expect the waiting passengers to spread out to the rear section whenever the screen flashes that an eight-car train is approaching. But for some curious reason, they don’t do this.

Many times, I have arrived to find the platform particularly crowded and have dreaded being squeezed in like a sardine all the way home. It can really be unpleasant to be literally touching the riders all around you and desperately hanging on to the overhead hand grips to keep from falling into the person next to you as the train starts up and jerks to a stop. I can’t imagine that any of my fellow riders ENJOY this.

And yet, invariably, whenever I look up at the station monitor and see that an eight-car train is about to arrive and thus make my move towards the end of the platform, I am usually almost always alone. Many is the time that such a train has arrived with the first six cars packed full to the limit, and yet the last car is so empty that not only am I not jammed up against my fellow riders, but I can actually grab a seat and read my book comfortably.

When I first observed this phenomenon, I figured it would be only a matter of time until my other fellow regular commuters figured this out and the eighth car became as packed as the others. But it’s been over two years now and things haven’t changed. All these commuters, who are mostly people bright enough to hold down white collar jobs, don’t seem to have noticed that all they need to do when they check to see how long before the next train will arrive is consciously register that extra bit of information on the screen and then act on it by walking a few steps in order to avoid a major inconvenience. Of course, if EVERYONE did the same, it would cease to be an advantage, so I’m not complaining.

As so many things do these days, of course, this got me to thinking. You could call this observation an example of the “herd mentality,” but I don’t really think that’s it. There’s no personal risk to those few who, like me, have caught on to the advantages of moving down the platform to wait for the arrival of the eighth car. The advantage we seem to enjoy is the simple ability to absorb one piece of readily available information and use it to apply a little bit of critical thinking to an everyday situation.

It also goes to show just how high and daunting is the sheer wall of ignorance for those of us who are aware of the issues of peak oil, resource depletion and overpopulation. It isn’t so much a matter of “educating” others, but a matter of getting them to even understand why the information could affect their lives. Unfortunately, the information about peak oil is far more complex and daunting that a simple number telling you how many cars are attached to the next subway train. Furthermore, if everyone did suddenly become aware of its importance, the advantage in understanding these issues would rapidly disappear, because then the eighth car would become hopelessly overcrowded as well.
Posted by Bill Hicks at 8:12 AM