It's Election Day in Virginia--and Once Again I'm Not Voting 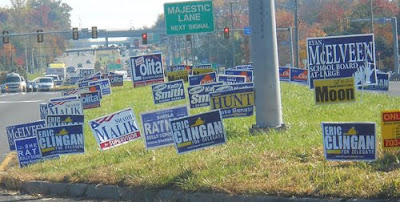 image: the fall colors are in full bloom on the byways of Northern Virgina

One of the drawbacks of living in the Old Dominion is that for some reason we insist upon having our state and local elections in odd numbered years--which means that there is not an autumn that goes by when thousands of ugly campaign signs for various candidates for office don't spread like an invasive plant species upon every inch of grassy roadway median around here. Even this year in which the highest office up for grabs is merely in the state senate, this blight upon the landscape has spread far and wide throughout my neighborhood. I've sometimes wondered just who it is going to the polls that is such a dimwit that their vote is actually influenced by the presence of these signs. And then I quickly decide that I don't want to know.

Our unfortunate insistence on having elections every single year means that it will now be the third consecutive set of contests in which I will not be exercising this particular constitutional right. Which is a pretty big change in outlook for someone who received his Bachelor's degree in political science, worked on several campaigns, once served as an election judge and had been dutiful about participating in every election since becoming eligible to vote in 1984. Never would have I imagined when I was younger that I'd eventually become so disgusted that I would extend a middle digit at the local polling place as I drive past it on election day.

The last time I cast a vote was when I reluctantly pushed the button for then-Senator Hopey-Changey and his running mate, Senator Credit Card Company Puppet. I'll admit that I had a brief flirtation with the odious Obama in the spring of 2008 when he was running for the Democratic nomination and I gleefully voted for him in his quest to dethrone Queen Hillary and put an end to America's eight-year run of hereditary monarchy in the White House. But then the Great Pretender turned around and put the dimwitted Biden on the ticket and enthusiastically supported the hideous TARP law, so that by the time November rolled around I was once again holding my nose and voting for the lesser of two evils evil of two lessers.

Since then, I've decided I'm not going to play that fucking game anymore. Obama has managed to greatly exceed even my worse expectations of the man. In fact, I've reached the point where I really think it would have been better had Senator Get Off My Lawn and Governor Vacuous Attention Whore won the last presidential contest. At least then we wouldn't have millions of delusional liberals out there still supporting what is essentially President Chimpy Bush's third term while actually "thinking" they managed to accomplish something three years ago because the charlatan in the White House now spreading the three American evils of of globalism, consumerism and militarism throughout the world is in fact NOT a pudgy, pasty old white guy.

Being a partisan in modern day America is a severe form of brain damage that prevents one from making a serious assessment of what ails the nation and then being able to act on it. I have no doubt that some of the people running for the local offices today here in Virginia might actually have at least some good intentions. Our current state senator, who was swept into office in 2007 in the leading edge of the political tsunami of revulsion against Bush that turned Virginia at least temporarily blue, actually seems like a decent guy. But maybe that's just because on the one occasion in which I met him in the flesh he didn't make my skin crawl.

Nevertheless, I won't be voting for him for reelection today because he carries that little capital "D" next to his name on the ballot. Anyone who wins the nomination of either major party is at this point automatically compromised to a greater or lesser degree. Even Dennis Kucinich caved in to the Mighty O on the latter's corporate giveaway health care plan after previously asserting that he could never support a plan that didn't take the profit motive out of the system. They may TALK and good game like they are on your side, but when push comes to shove they will ALWAYS dance to the tune played by their campaign contributors. That's just the way the game works.

Despite my extreme cynicism, however, I'll once again state my hope that the Occupy movement will be able to develop into a legitimate political force. So far, it has avoided being co-opted by partisan politics and is drawing strength from disaffected Americans from across the political spectrum. If that keeps up, it might just be enough to draw me into the voting booth again.

Nevertheless, the rubber will not meet the road, as they say, until it comes time for the Occupy movement to face up to the fact that what is needed is a genuine change in America's mindless consumer culture. Anyone out there rallying against the 1% whose real motivation is that they want to live the same materialistic lifestyle that their parents did and thinks the movement is going to bring that about is in for a rude disappointment.

So, I wish the best of luck to my fellow Virginians who are traipsing off to the polls today in another futile and masturbatory exercise in so-called "democracy" thinking that this time their votes will really count and that their guy or gal will bring about the change they so desperately seek. As for me, the few extra minutes of sleep I got this morning by not joining them will no doubt prove to be far more valuable.


Bonus: George Carlin - "If you vote you have no right to complain"