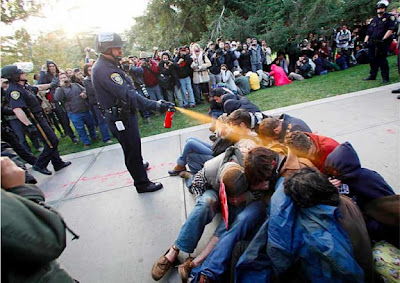 I’m sorry, Madame, but this (from Talking Points Memo) just isn’t going to cut it:


University of California-Davis Chancellor Linda Katehi on Monday apologized to students for last week’s pepper-spraying incident, where a campus police officer at point-blank range sprayed down a group of sitting protesters.

Well, since you WERE the chancellor of the university on Friday, you really should do the honorable thing and GTFO. But sadly, no:


Katehi has been under growing pressure to resign, but so far she’s staying put. “The university needs me,” she told ABC’s Good Morning America Monday morning. In an interview with NPR affiliate KQED, Katehi said the university police were not supposed to use force. She said, “as a human being,” she was “horrified” by the pepper-spraying images. And in front of students later on Monday, the chancellor admitted she must work to earn back the students’ trust.

“I know you may not believe anything that I’m telling you today, and you don’t have to,” Katehi said. “It is my responsibility to earn your trust.”

The crowd chanted “Shame on you” and “resign” at Katehi after she finished her remarks, AggieTV reported.

Let me put this as bluntly as I can, Ms. Katehi, so that even a dimwitted academic such as yourself can understand it: apology not accepted. You are the “leader” of a university that employs brutish thugs who have no inhibition against pepper-spraying students for engaging in non-violent protest. The same students, incidentally, who pay thousands of dollars a year for the “privilege” of attending your morally decrepit institution—many of whom have no doubt put themselves in hock with massive amounts of student loans in order to pay your salary, among other frivolous expenses.

Being in charge isn’t all about getting the big office, all the perks and the high salary. You’re also the one who gets to take the fall when things go wrong. When your employees fuck up so massively and deliberately, YOU should be the FIRST one to go. That’s called accountability, something which we have far too little of in this country these days.

In fairness, you’re obviously not the only one. The entire management team of every Wall Street firm that was complicit in crashing the economy back in 2008 should have been similarly removed from their positions and then vigorously prosecuted for their actions. The entire defense and foreign policy team of the Bush administration that was complicit in launching the Iraq War and engaging in torture and rendition should be on the dock at the International Criminal Court in The Hague. The current occupant of the White House, who utterly failed to prosecute the criminals on Wall Street and in the Bush administration and in fact has committed his own set of heinous war crimes in Afghanistan and with his drone missile campaign, should also at a minimum do the honorable thing and resign.

Does all of that seem far too extreme? If so, it is only because you have become inured to the idea that accountability is only something that happens to little people and not the movers and shakers of our society. When President Hopey-Changey said almost immediately upon inauguration that we need to “look forward,” he was signaling that he was not going to hold those responsible for wrecking the economy and lying us into war accountable for their actions. Upon hearing those words, any right-thinking person should have immediately begun demanding Obama’s impeachment for dereliction of duty.

Much as rhetorical con men like Obama like to try to complicate these issues, it really is very simple. Either you innately recognize that giving $700 billion in taxpayer bailouts to financial criminals; or launching a war against a country that did not attack our own and posed no military threat to us; or operating an unaccountable concentration camp on foreign soil; or torturing defenseless prisoners; or wantonly assassinating American citizens without trial; or bombing innocent villagers with drone missiles; or not reporting to law enforcement a sexual predator preying on children in your midst; or tear-gassing, billy-clubbing and pepper spraying non-violent protesters seeking economic justice is morally wrong, or you do not. And if you do not, you are the enemy and should be considered as such regardless of position, education level, social standing or political affiliation.

Your apology is not accepted, Ms. Katehi. And I suspect that this is only the beginning.
Posted by Bill Hicks at 6:53 AM