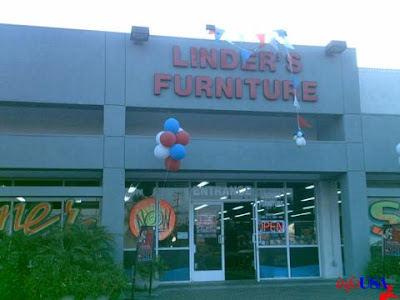 Furniture has been a bad business to be in for awhile now, and it just got worse:


Linder's Furniture is gearing up to close its stores across California, including its Superstore in Cathedral City.


Sadly, though I am not familiar with the chain, it appears as though this company may have had at least some redeeming qualities:


The Southern California home furnishings, mattress and consumer electronics chain opened the Cathedral City store in April 2010. At the time, company president Eric Foucrier said he wanted to open the job process up to local residents who had been hit hard by the recession and lost their jobs.

That sucks. So how bad is the overall damage?


Linder's was launched in 1980 and has locations in Cathedral City, Murrieta, Rancho Cucamonga, Westminster, Torrance, Fullerton, Laguna Hills and Cerritos.

Linder's also is the parent company of Legacy Designer Showcase in Palm Desert. That store is gearing up to close as well, employees said.


The monthly jobs report released yesterday by the Ministry of Information Bureau of Labor Statistics tried to claim that America gained jobs last month even though their own statistical manipulation, known as the "Birth-Death Model," added more phantom jobs than the overall gain. Those jobs are supposedly from smaller businesses whose additions get overlooked. Smaller businesses that is, like Linder's Furniture. Just some more of the lies we tell ourselves to convince the unaware that all will be well if they just wait long enough.
Posted by Bill Hicks at 12:58 PM