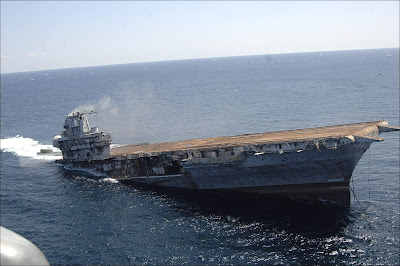 If you are open minded, you learn something new every day. For example, before today I didn't know the active duty military could actually lay off its members:


Imagine joining the Navy ten years ago with a career in mind. Now, sailors with that career plan are getting pink slips as the military looks for places to save money.

Since June, 16,000 mid-career sailors have been waiting to find out if they will be forced out early.

Last week, the Navy began its layoffs when the first of two rounds of personnel cuts were announced.

And here I was always under the impression that a military career at least gave you job security. Also remember, all of this is happening before the mandatory cuts required by the failure of the deficit reduction "super committee" to reach an agreement kick in. As I've said before on this blog, every dollar of federal spending cut means potential job losses, either directly of indirectly. When you consider that we have a trillion-and-a-half dollar imbalance badly in need of correction, that's a pretty sobering fact to consider.
Posted by Bill Hicks at 7:24 PM