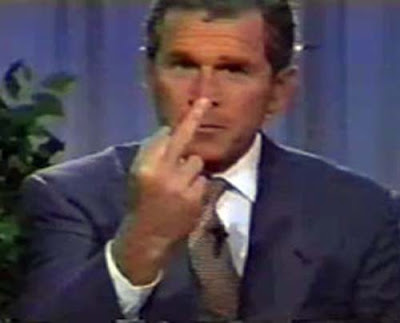 As much as I like using President Hopey-Changey as a rhetorical punching bag, I sometimes lament that I didn't start this blog back when his predecessor was still in office. To any unbiased individual with a working knowledge of American History, President George Bush the Lesser has to be ranked down there with the likes of Millard Filmore, James Buchanan and Warren Harding as the worst ever occupants of the Oval Office. The three main duties of any president is to protect the country from attack, not involve it in unwinnable military entanglements and be a good steward of the economy. Strike three there, Chimpy.

At this point you would think that even the haves and the have-mores, who Bush once notoriously referred to as his "base," would have had enough of the man. Well, apparently not:


Bush, who recently authored the book Decision Points, is scheduled to speak at the forum starting at 8:30 a.m. He will take part in a session called “Fireside chat” with President George W. Bush, which will be moderated by James S. Turley, Chairman and CEO of Ernst & Young.

So what'll it set you back you to hear this speech by the former Dimwit-in-Chief?


The cost to attend the entire conference, which is sold out, is $3,695. It is not open to the public.

Proof positive that it is not just buyers of Call of Duty Jeep Wranglers who have more money than brains. There is good news to be had in this situation, however:


The protest organized by Occupy Coachella Valley is set for 9:30 a.m. Friday at an Ernst & Young Strategic Growth Forum at the JW Marriott Desert Springs Resort & Spa in Palm Desert.

Kudos to the Occupy protesters. Since Bush is not currently sitting in a cell at the international war crimes tribunal in The Hague as he should be, the least we Americans can do it make it extremely unpleasant for any group of one-percenters who invite him to "speak."


Bonus: Bush may be long gone, but this song never gets old.