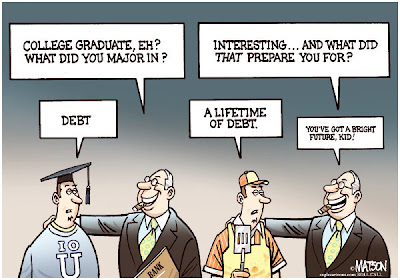 One of the more laughable notions coming out of the mouths of conservatives these days is that cutting government spending doesn't cost people their jobs. It's almost as ludicrous as the idea that tax cuts don't cause budget deficits. Don't get me wrong. Unlike many liberals and progressives, I realize that government spending is unsustainable and that tax increases even on just the wealthy who can afford to pay them would do no more than delay the ultimate day of reckoning for government finances.

No, the reason I focus on the layoff effects of government funding cutbacks is to highlight yet another area where good paying jobs are being destroyed, never to return as the economy continues its peak oil-induced downward grind. The latest story highlighting this phenomenon concerns the effect of cuts in state funding going to Washington State University:


...the fact that the state has cut a whopping 60 percent of its support for WSU in the past four years, prompting more than 500 layoffs at the university - about 12 percent of its workforce - is a big deal. Many fear that even bigger cuts are coming.

Real estate sales and construction in Pullman are down, while unemployment is up. That's unusual for a local economy that historically has been immune to big swings.

Whitman County for years enjoyed the lowest unemployment rate in the state, in part because half the jobs are government jobs. Unemployment stood at 4 percent as late as 2008, before starting a steady upward march. The rate reached 7.5 percent in July, still lower than the state average of 9 percent.

Of course, the budget cuts have had another, more perverse effect:


So far, retail trade seems to be holding up, in part because the number of students continues to rise despite huge tuition increases. Tuition has approximately doubled in the past five years, to more than $10,000 per year.

Right here, you can see what I have been saying about college tuitions and student loans being in a bubble that is about to burst in a very big way. Tuition has DOUBLED in just the past five years and yet they are STILL laying people off? Obviously, that rate of increase will not be sustainable for very long. One can only imagine what's going to happen when these students finally wake up and realize that the $10,000+ per year they are paying for tuition is a ticket not to a middle class lifestyle the were "promised," but instead to a lifetime of debt slavery.
Posted by Bill Hicks at 6:54 PM