Sign of the Times: University of Maryland Cuts Eight Sports Programs to Save Money 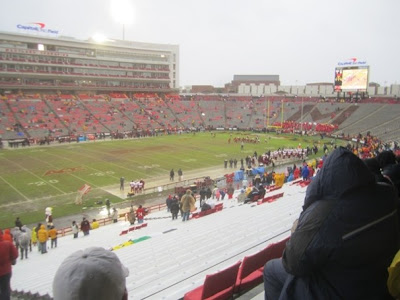 image: the University of Maryland football team isn't the only sports team at the school falling on hard times.

I've written here before about how rising college costs represent one of the biggest bubbles in our economy and how it is likely to pop in the very near future. And now, right on schedule, comes a story from Bloomberg that confirms the first signs that the bubble is starting to burst:


The University of Maryland, which has one of the smallest operating profits from football among major public universities, plans to cut eight sports to save money, school President Wallace D. Loh said.

Men’s cross country; tennis; swimming and diving; indoor track, and outdoor track are to be eliminated, as well as women’s water polo; acrobatics and tumbling, and swimming and diving. The sports will be discontinued on June 30, 2012, Loh said in a letter yesterday on the university’s website.

Loh said the teams would be given the chance to raise enough money by that 2012 deadline to fund themselves for eight years. A similar offer in 2010 at the University of California, Berkeley, led to five threatened sports being saved.

Maryland made $1.8 million in football revenue during the 2010 fiscal year, ranking 49th of the 53 public schools in college football’s six biggest conferences, according to research compiled by Bloomberg News. Football and men’s basketball are the only two revenue-producing sports at the school and they help subsidize other athletic teams at the university, according to Loh.

“We are different from many other public research universities in that we receive no state support,” Loh said yesterday in a news conference. “We have a financial model for two programs, only two programs, which have to subsidize all the rest of the sports. It is a national model that is faulty, that is inequitable, and that is unsustainable”

Yep, I partly agree with you there, Mr. Loh, your system is in fact quite inequitable and unsustainable. But the problem doesn't lie with your sports program...the problem lies with an entire university system that makes students into debt slaves to obtain degrees that have become nearly worthless in a slowly collapsing economy. So while this sucks for the University of Maryland swimmers and tennis players, it is in fact just the tip of a VERY big iceberg.
Posted by Bill Hicks at 12:43 PM