My Personal Connection to the Herman Cain Sexual Harassment Scandal 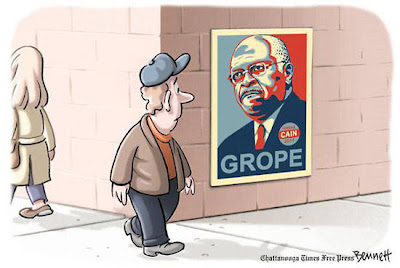 A few days ago, my wife and I discovered that we actually have a personal connection to the Herman Cain sexual harassment scandal. One of Cain's four accusers is a good friend of one of my wife's best friends. My wife informs me that I met this woman at a party once a few years ago, but I'd be lying if I said I remember very much about her. Apparently, she received a $45,000 settlement to resolve her allegations against Cain. My wife also said that from what she knows about this woman she is, or at least was, a staunch conservative. But regardless of her political views, she must be going through hell right now with all of the publicity.

The really sad part about this whole mess is that it should never have come to this point with Herman Cain. The man clearly wasn't a serious candidate for the presidency from the very beginning. Not only has he never held elective office, he had no campaign apparatus to speak of, and never should have been allowed into the Republican presidential debates in the first place. Like former perennial black Republican candidate Alan Keyes, he was invited to the big show by a party desperate not to appear so...um...white.

Like Keyes, Cain probably thought he was making a smart business decision. The publicity he would garner from his sham presidential campaign and dropping a few incendiary liberal-baiting verbal bombshells would no doubt help him sell books, or give him an advantage in whatever other business scam he would get into next. For that's what matters in Attention Whore America, getting the media to put your name before the general public. That's as good as gold these days.

Cain almost certainly never expected his campaign to end up being anything more than an Alan Keyes-like sideshow. He'd hang on until after the first few primaries and caucuses, and then bow out gracefully while endorsing the front runner. That's the only explanation I can come up with for why he got blindsided by all of these sexual harassment accusations. If he were still running neck-and-neck at the bottom of the polls with Rick Santorum, I seriously doubt the press would have cared, and this stuff would never have come out.

But a funny thing happened along the way. The ongoing breakdown of our political system and a Tea Party movement desperate to demonstrate that it is not racist catapulted Cain into momentary front runner status. From that point, it was merely a matter of time before the long knives came out. The thing is, had Cain done even a minimal self-assessment beforehand, he would have easily known that having FOUR women make credible harassment allegations and receiving monetary settlements would be the death-knell of his candidacy once it became known.

The Cain fiasco clearly demonstrates that American politics has descended to the level of a reality television show. And since neither party is serious about fixing what ails the country, that is entirely fitting. The Republican front runner carousel of Sarah Palin to Donald Trump to Michelle Bachmann to Rick Perry to Herman Cain really ought to frighten any sensible citizen. The fact that this is the best that party can do in opposition to an incumbent that sorely deserves to be defeated next year shows that the empire is clearly entering the early stages of its death throes.
Posted by Bill Hicks at 12:11 PM