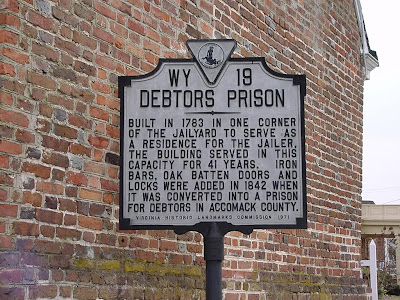 When most people think of the concept of a debtors prison (assuming they ever think of it at all), it probably conjures up visions of a Charles Dickens novel. The whole concept sounds as archaic as Victorian England. We have certainly evolved far beyond such an unenlightened notion, right? Sadly, no, as reported last week by Yahoo Finance:


As if life wasn't already tense enough for Americans who can't pay their debts, collection agencies are now taking advantage of archaic state laws to have some debtors arrested and sent to jail.

More than one-third of US states allow debtors to be arrested and jailed, says Jessica Silver-Greenberg in the Wall Street Journal.

Judges typically grant arrest warrants when the debtors have failed to show up for court dates or failed to make court-ordered payments.

Of course, the reason debtors have failed to make court-ordered payments is often the same reason they didn't pay their debts in the first place: They don't have any money.

In September, a 53 year-old woman named Vivian Joy was stopped for a broken tail-light in Champaign, Illinois. And then, because the cops discovered that she still hadn't paid $2,200 to a collection agency, she was cuffed and carted off to jail.

She doesn't have any money.

Well, duh. That would typically be the reason that someone wouldn't pay their bills. Because, you see, most people in our mindless consumer culture are addicted to credit. If you don't pay your bills, your credit will eventually get cut off. Many would sooner chop off one of their own limbs rather than ever allow that to happen. Credit is almost like a illegal narcotic for these people. Sticking them in jail, where among other things they now can't work and earn any money to pay their debts, is just plain stupid. Anyone who would advocate for it is not only a heartless Randian stooge, but an incompetent one as well.

Alas, my home state seems to be crawling with them:


Jailing debtors for not paying their debts is apparently especially popular in Illinois.

Illinois, of course, ranks right there with California in terms of its budget being out-of-whack. Many school districts, hospitals and state contractors have to wait for months to receive promised payments. Aside from hypocrisy of a state government that has its own trouble paying its bills jailing debtors, there is also the fact that it can hardly AFFORD to keep more people in its jail cells.

Credit Yahoo Finance for getting it exactly right on this issue:


This practice, needless to say, is preposterous. If people can't pay their debts and have no prospect of being able to pay their debts, they should declare bankruptcy. And the debts should be written off. Companies don't go to jail when they default. Neither should people.

No, companies certainly don't get thrown in jail for not paying their debts. In fact, if they are big enough, the government BAILS THEM OUT. All of this is just more fuel for the Occupy fire, that I suspect will continue to be fanned by the sheer greed and stupidity of the elites until it becomes a nationwide conflagration.
Posted by Bill Hicks at 7:51 AM