There is No Shame 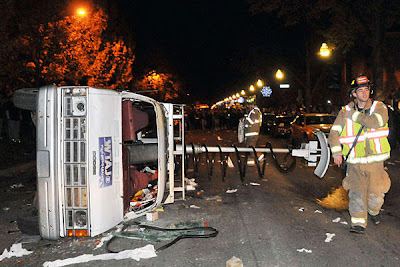 image: The aftermath of a riot by Penn State students in support of their pedophile-enabling head football coach

I made a couple of false starts on writing a post about the ever-growing Penn State scandal, but was having trouble sounding the right note. So instead, on this college football Saturday as the Penn State football team prepares to take the field for the first time since 1965 without Joe Paterno as its head coach, I decided to reprint part of the blistering and brilliant commentary posted by Jim Quinn of the Burning Platform on Thursday. The only quibble I have is that Quinn originally titled his piece "Is There No Shame," when it is clearly obvious that in modern day America the question is no longer open to debate.


“Never be afraid to raise your voice for honesty and truth and compassion against injustice and lying and greed. If people all over the world…would do this, it would change the earth. ” ― William Faulkner

I wish I could believe William Faulkner’s advice was possible in the world we live in today. But sadly, I am losing hope in our civilization. We seem to have entered a death spiral with little likelihood of pulling out. Our society has become so degraded and our populace so apathetic and willfully ignorant, that I think we are too far gone to recover. Honesty, truth and compassion have been soundly defeated by injustice, lying and greed. Our technologically advanced society has become a stinking cesspool, devoid of humanity, common sense and morality. Those with the power and wealth who control our country do not concern themselves with quaint concepts like good and evil, right and wrong, or moral and immoral. Sociopaths see no obligation to society, humanity, or posterity. They only care about themselves, their wealth, their status, their reputation, and their control of others. They are incapable of feeling shame or remorse. They blindly march forward towards their own and society’s self-destruction.

Joe Paterno was fired by the Penn State Board of Trustees on Wednesday night as head football coach of Penn State. It was the first good decision that has been made in the last two decades by the leaders of Penn State. The man was told that his Defensive coordinator was seen in the locker room shower raping a 10 year old boy in 2002. He did not call the police and report this crime. He and the other top officials at Penn State brushed this crime under the rug, allowing at least seven more young boys to be raped by this monster. The 28 year old graduate assistant not only did nothing to stop the crime he witnessed, but he accepted a position as an assistant coach, knowing that Paterno and the Athletic Director never did anything to hold Sandusky accountable for his crime. Sandusky was still on campus working out as of last week. The actions of all the players in this disgusting example of how far our society has degenerated are enough to make someone lose all hope for humanity:

Jerry Sandusky creates a charitable organization so he can gain access to little boys. Multiple incidents are witnessed on campus from 1994 through 2002. A mother reports Sandusky to the Penn State police in 1998 and nothing is done by the men in the Administration. The investigation is dropped, but Tim Curley forces Sandusky to retire in 1999. It is clear that everyone in the top echelon of Penn State knew Sandusky was a deviant pedophile. But letting it become public would have been a black mark on the football program and could have reduced the huge profits generated by Paterno’s kingdom.

Sandusky continues to rape little boys for the next eight years because of the cowardice and complete lack of morality exhibited by the men in high places at Penn State.

With the issuance of the grand jury report last week, the psychotic nature of these men was on display for the world to witness. In a stunning display of arrogance and hubris, Paterno and the President of Penn State announced their full support for the Athletic Director and VP of Finance who were arrested. These men did not think they did anything wrong. They clung to the fact that they adhered to the laws created by other men. In a despicable display, Joe Paterno led a cheer at a pep rally in front of his house with his arms raised in victory. At least eight boys had their lives ruined and Joe Paterno leads a cheer.

The Board of Trustees summoned the courage to fire Paterno and the President last night. In another display that makes me wonder about the future of our country, thousands of students rioted in support of Joe Paterno, breaking windows, turning over news vans, and starting fires. Are these young people incapable of critical thinking and are just driven by emotion and mindless rage? Can’t they distinguish between facts and lies? Do they care more about football than innocent children being raped?

I have been blind with rage for the last week as I’ve watched the powerful men of Penn State attempt to retain their power and reputations at the expense of truth, honesty, and accepting responsibility for their actions and willful inaction. As I’ve watched this tragedy unfold I was struck by the thought process of rich men in positions of power. They have huge egos and believe they are above the law. They think so highly of themselves they believe they can make the rules and ignore the laws which the little people must follow. They have no moral compass whatsoever. They cannot be shamed. The most despicable behavior by prominent men has been willfully overlooked because these men generate $50 million of profit per year for the university. Their sociopathic desire to protect their reputations and power has led to a scandal of such epic proportions that it will haunt Penn State forever and has permanently damaged the institution.

The rest of Quinn's essay, in which he goes on to compare the Penn State situation to the larger issues going on in America, is also well worth reading. You can read the rest at the link.

As for me, today, unlike most Saturdays, I definitely am NOT ready for some football.
Posted by Bill Hicks at 1:00 PM