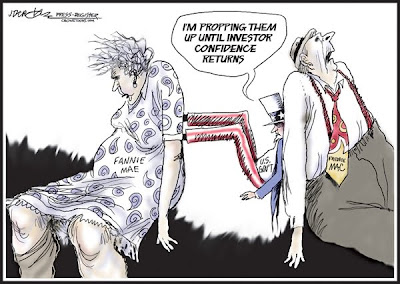 Completing today's trifecta of posts regarding legally sanctioned corruption taking part at the behest of the Obama administration is this outrageous story from CNN:

That's a total of $95.4 million, which will essentially be coming from taxpayers, who have been keeping the mortgage finance giants alive with regular quarterly cash infusions since the Federal Home Finance Agency (FHFA) took control of the companies in September 2008.

Of course, all of this is sparking "outrage" in the Imperial Capital:


That published report sparked a political firestorm on Capitol Hill that could lead to legislation to put strict limits on pay at the two firms. But it only told part of the story. The full extent of salary, deferred pay and bonuses are only found in the filings.

Rep. Spencer Bachus, the chairman of the House Financial Services Committee, has scheduled a vote in his committee Tuesday on his own legislation that would suspend the compensation packages of top executives at the firms.

"The fact that the top executives of these failed companies are receiving multi-million dollar pay packages, plus millions more in bonuses, is an added insult to the taxpayers who are forced to foot the bill," Bachus said in a statement announcing plans to hold the vote.

Ummm...not to be a contrarian there, Representative Bachus, but shouldn't you assholes have included a provsion about CEO compensation in the original Fannie and Freddie bailout packages? Or, is it more likely that you and your colleagues are merely looking for a way to deflect attention from that little 60 Minutes piece that aired on Sunday about all of your insider stock trading?

And it's not like the bailouts of these two entities are a thing of the past, either. Earlier this year there were reports that the two companies were begging for additional handouts, which means this outrageous CEO compensation is coming directly out of your taxes and mine. There was also another little tidbit to this story which sent me into spasmodic fits of cynical cackling:


The latest cost estimate from FHFA is that the two bailouts will end up with a net cost to taxpayers of about $124 billion through 2014, though that figure could rise as high as $193 billion. Even the lower cost estimate will make it the most expensive bailout of the financial crisis --far more costly than bailing out the nation's banks or automakers.

The CEOs and the other top executives at Fannie and Freddie get all their pay in cash, and none of it in company stock, which is generally deemed worthless.

Maybe if we'd given the fuckers a million shares of the stock instead of cash, they'd actually have an incentive to get things straightened out. But no, that requires far too much common sense.
Posted by Bill Hicks at 6:01 PM