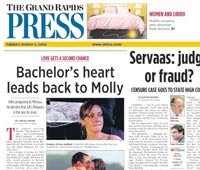 image: could the headline on the left be a big part of the reason why the Grand Rapids Press is in deep financial trouble?

You have to wonder how long it will be before smaller newspapers give up trying to hang on with reduced content and simply fold altogether. This article doesn't say how many employees the two Michigan papers in question had to start with, but I can't imagine that this layoff notice doesn't represent a significant decimation of their respective work forces:


The Grand Rapids Press and the Kalamazoo Gazette will lay off more than 200 workers combined as part of a massive corporate overhaul, according to letters sent to the state early this month.

The Grand Rapids Press will lay off 146 employees in January, according to a Worker Adjustment and Retraining Notification Act (WARN) letter sent to Manager of the Workforce Investment Act Stephanie Beckhorn on Nov. 2.

According to another Nov. 2 letter, the Kalamazoo Gazette will lay off 77 employees.

The 223 positions being terminated range from officer managers and clerks, to press operators and technicians, to sales people and editors.

It is likely getting to the point where these smaller papers will be reduced to mostly featuring wire service content with little local news whatsoever. Which, of course, will make it much easier for corruption among municipal government officials to thrive.

Unlike with the decline of hard copy books, this development is not nearly as distressing to me. Newspapers might have had a chance to save themselves these past 10 years has they continued to play their traditional role of being a watchdog against government abuses. Instead, most became companionable lap cats, rarely questioning the status quo while focusing on the same utterly irrelevant, celebrity-obsessed trivia as television. By doing so in the Internet age, they managed to make themselves completely irrelevant to the point where I won't miss them when they're finally gone.
Posted by Bill Hicks at 6:52 AM